In a 90-minute film and a one-hour read

An absolutely beautiful film about the most important topic in the history of humankind—our sustainability as a species.

Two and one half hours—for your children, for their children, and for the longterm  sustainability of our civilization. Before we can solve the greatest problems humans have ever faced, we must understand the truth about what caused those problems and exactly what we must do to correct them.

I sincerely believe that if everyone understood the terrifying big picture of global depletion as I do, that humankind could quickly get back to living in harmony with Nature. They would quickly understand the simple fact that our civilization cannot continue for much longer without radically changing the way we live.

Both the film and the book featured today do an outstanding job of describing the unprecedented environmental problems that we now face. But neither describes exactly how we must deal with these problems quickly enough to prevent the collapse of our civilization before the end of this century.

September of 2013. Sadly, this powerful book of truth has not been read by nearly enough people.

The film excels at painting the visual picture of the kinds of damage that humans are causing but then, at the very end, lulls the audience into thinking that everything is going to be okay. Sadly, the single most powerful step that we humans could take is only mentioned briefly and is somewhat buried amongst twenty other possible initiatives.

On the other hand, the book was designed to simply JOLT the reader into understanding that business as usual is not going to work. Rather, we must make RADICAL changes in the way we live or our civilization is almost certain to collapse.

Please take just two and one half hours to gain a “big picture” understanding of the horror show taking place behind the scenes of our outrageously unsustainable consumption habits. This level of understanding (shared by very few) should leave you ready to learn more about the ONLY viable way out of the mess that we’ve unknowingly created.

First, the 90-minute film, HOME. One of my earliest blogs (February 2011) was about this remarkable film that so beautifully documents how life began on planet Earth four billion years ago and how everything is connected. Beautifully narrated by Glenn Close, she speaks about the fact that, in just the last fifty years, we humans have inflicted more damage on the fragile harmony of Nature than all previous generations of humans combined during our entire 200,000-year existence.

As you’re viewing the stark reality of the damage we’ve inflicted, she mentions that we must change these deadly trends within the next ten years or it will be too late. Of course, she said that in 2009, which was five years ago—meaning that as of 2014, we now only have five years left.

The lulling begins during the last fifteen minutes, as she describes many initiatives currently underway that are making the world a better place. As she describes these noble initiatives, one tends to forget the URGENCY that has been described for most of the film.

Like our largest environmental organizations, she never explains the fact that quickly replacing most of our animal-based calories with plant-based calories—would do more to restore our fragile ecosystem than all other possible initiatives combined.

Yesterday, as I watched this film, it seemed to be a slightly different version than the one I saw in 2011. It even told the story of Easter Island that I don’t ever remember seeing. Even if you’ve already seen this film, you need to watch it again. Then, after reading Emmott’s book, you’ll be ready to hear more about the only viable solution.

Next, the one-hour read. To be sure, no one will ever accuse this author of trying to lull you into thinking that everything is going to be okay. No, he lays out the facts in an “easy-to-grasp” format, speaks of radical changes in behavior that are needed to avert the collapse of our civilization, then concludes that he doesn’t think we will make those radical changes soon enough. Hence, he concludes, that “I think we’re F_ _ _ _D.” Yes, those were the last four words of the book.

I disagree and shared my theories with Dr. Emmott when we met in London one month after the book was published. He concurred that a widespread switch to plant-based foods by the most affluent two billion people would have a remarkably positive impact on our environment. Here’s what I posted about this great book on my Store page. 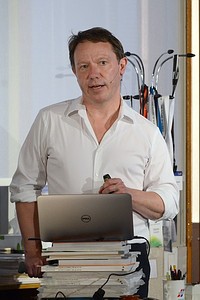 Dr. Stephen Emmott as he appeared in a 2012 Forbes article.

TEN BILLION by Stephen Emmott, PhD. As of late 2013, this is my most recommended book—for people who are interested in learning more about the sustainability of humankind. I recommended it to James Cameron on 9-14-13 and he and wife Suzy read it the next day. I first read about this powerful book in July, 2013; then purchased a Kindle copy when it was published in early September.

Dr. Emmott is a scientist who heads up computational for Microsoft in the UK. He is also a visiting professor at the University of Oxford. Wanting his message to be a wake-up call to leaders everywhere, he paints a bleak (almost hopeless) picture in this book. But I am more optimistic because I see a plant-based solution out of the global mess that he so brilliantly describes. I visited with him in London on 10-9-13 and reviewed my plan with him. He agreed that it was the best plan that he had heard.

You can get the Kindle version for your laptop for $5.99 and can read before dinner tonight.

So what about that “Solution” mentioned in the title?

Well, I have been blogging about it for the last three years, having posted over 800 blogs during that time. I have been told by people who’ve read all of them, that the first two listed below are among the best I have written. Take one more hour and read these dozen blogs, all posted in the six months after SUSTAINABILITY became my #1 topic in July of 2013.

The first two blogs address the ONLY viable course of action that will enable us to avoid the worst effects of global warming, water scarcity, soil erosion and deforestation.

A former strategic management consultant and senior corporate executive with Ralph Lauren in New York, J. Morris Hicks has always focused on the "big picture" when analyzing any issue. In 2002, after becoming curious about our "optimal diet," he began a study of what we eat from a global perspective ---- discovering many startling issues and opportunities along the way. In addition to an MBA and a BS in Industrial Engineering, he holds a certificate in plant-based nutrition from the T. Colin Campbell Center for Nutrition Studies, where he has also been a member of the board of directors since 2012. Having concluded that our food choices hold the key to the sustainability of our civilization, he has made this his #1 priority---exploring all avenues for influencing humans everywhere to move back to the natural plant-based diet for our species.
View all posts by J. Morris Hicks →
This entry was posted in Activism & Leadership, Big Picture, Sustainability and tagged u. Bookmark the permalink.

1 Response to Global Depletion. The Big Picture. The Solution.