If the ship is sinking, you best tell the passengers the truth about the gigantic hole in her hull. — J. Morris Hicks

A few days ago, I wrote about the tragedy of the world’s most prominent environmental groups not telling us the truth about the primary common cause of the vast majority of our environmental problems. Without a doubt, that leading cause (by far) is our massive global consumption of meat, dairy, eggs and fish.

With a mission of caring for our planet, how could the world’s top “environmentalists” possibly not be telling us the complete truth about the single leading cause of  global warming, water scarcity, deforestation, soil erosion, ocean acidity and many more? In a recent online movie trailer, Michael Pollan succinctly explains why:

I think they “focus grouped” it and it’s a political loser. They’re membership organizations you know; they’re looking to maximize the number of people making contributions. And if they get identified as being “anti-meat,” it will hurt with their fundraising. (See 90-second YouTube video near the end of this blog.)

Quite simply, the most affluent two billion people in the world (those who eat most of the meat & dairy)—it’s like they’re all “sleepwalking off of a cliff,” says James Cameron. And despite the civilization-ending consequences of not taking decisive action now, none of our environmental, scientific or political leaders have chosen to awaken the sleepwalking public. Maybe this new story will help.

The Story of Titanic II — a fable by J. Morris Hicks

After the tragic sinking of the first Titanic in April of 1912, with the loss of over 1500 lives, the leaders of England set out to build a much larger and even more “unsinkable” ship and to dedicate her maiden voyage to the victims of the first disaster. And so they did.

So on the tenth anniversary of the first Titanic maiden voyage, following a gigantic memorial service for the victims, the mighty Titanic II set sail from Southampton on a glorious spring morning—this time carrying a new record 3,000 passengers and crew.

With massive celebrations being planned for her arrival in New York, the world’s most famous  ship was making record time for the first three days of the passage. As with the first Titanic, the new ship featured a star-studded passenger list who were enjoying the time of their lives for the first half of the voyage.

But that gleeful atmosphere ended suddenly when everyone onboard felt a bump as Titanic II struck a submerged iceberg. The captain immediately got on the p.a. system and advised everyone not to worry—that everything was under control.

Then he met with his five most senior officers and learned about the severity of the situation. There was a large hole in the starboard hull just under the waterline near the bow.

They’d already tried to isolate the problem but had concluded that the ship would almost certainly sink. The good news was that instead of having only a few hours (like the original Titanic), this time she was expected to float for another few days. Surely help would arrive in time to save everyone.

The captain asked his engineers if there was a possibility of saving the ship. Was there anything that could be done to keep her afloat? They all assured him that there was not—because they didn’t have all of the knowledge, the skills, the manpower or the equipment required to make the needed repairs.

So the captain made a plan—stating that the complete details of this predicament were not to leave this room. We don’t want the passengers to panic, so we’re going to do our best to do business as usual until help arrives in a day or so. We’ll tell them that we need their help and ask them to lighten ship, conserve power & water and try to stay on the port side of the ship—to help keep the ship level.

The ship’s crew began assisting passengers in all of the above and tried to use peer pressure to force everyone to start throwing most of their belongings overboard. The captain knew that all these actions would not save the ship, but it might keep her afloat for a few hours longer—and it would help keep the passengers busy. Plus, everyone would have that warm feeling that they were doing their part to save the ship—like when they recycle their newspapers back home.

Fast-forward 48 hours. Incredibly, help never came and the ship began to sink. As in 1912, women and children were loaded into limited lifeboats, but there were still over 1500 people left on the ship when the hull broke in half and Titanic II began to go down quickly.

Minutes later, the captain found himself floating among a group of hefty looking men from the 3rd class section. One of them asked what had actually happened to the ship. The captain explained the large hole in the hull and that there was nothing that could have been done to save her. When asked why, the captain replied that they lacked the necessary “knowledge, skills, manpower and equipment” to make the repairs needed.

Captain, if you’d just told us the truth, we could’ve saved the ship and all onboard.

The stocky, blue collared man replied, “But Captain, I am traveling with a group of twenty shipbuilders on our way to New York for a project there. And we had all the tools & equipment onboard that would’ve been needed to repair that hole.”

As the captain drew his last breath and started to go down, the last words he heard were these:

If you had told everyone the truth, we could have easily saved the ship—and all onboard. 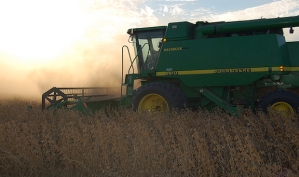 We’re now burning down the Amazon rainforest to grow soybeans to feed the pigs in China, now the world’s largest consumer of meat—destroying the lungs of the Earth.

Fast forward 92 years to 2014 and our situation is far worse than what the passengers and crew of Titanic II experienced in 1922. Today, we’re not just affecting the lives of 3,000 unlucky people, we’re systematically compromising the future of our entire civilization and ultimately, the human species.

Tragically, we’re not being told about three crucial truths that, if widely known, would save millions of lives, repair our fragile ecosystem and literally change the world:

I mentioned the 90-second movie trailer above; it’s all about the failure of our “system” to alert the public to the leading drivers of our most urgent environmental crises.

For a more detailed look at our unprecedented dilemma, take a look at my recent blog entitled: NOTHING is more important than SUSTAINABILITY! I am convinced that nothing has ever been more important in the entire history of humankind.

Finally, there is one other blog I would like to share; it’s one that I wrote in 2011 about the chairman of the world’s largest food company. He has a great deal of knowledge about the unsustainability of our typical Western diet, but like most leaders, he probably still believes that we actually “need” to eat animal protein. World hunger, energy, water — and the “obvious” solution

Early Comment & Question. Shortly after posting this blog, I received this comment: Did you just make that story about a Titanic II up? I can’t find a single reference to it anywhere. I then added “fable” to the title and replied to her:

Yes, Barbara, the story of Titanic II is my own creation, but that doesn’t make it any less relevant to what is happening today. Only now, its much worse—All seven billion human lives and the future of billions more are at stake. Yet those whom we’re trusting to take care of our environment are not telling us the truth—because it might hurt their fundraising efforts. Best to you and be well, J. Morris Hicks