Introduction. This is the page where you can stay up to date relative to the sea ice extent in the Arctic. There are twelve charts below for the latest twelve months of data from the NSIDC, the National Snow and Ice Data Center.

This page includes graphs showing sea ice extent by month since 1979. You will see below that records are being set for each month for the lowest ice extent on record.

What about that Crisis in the Arctic?

When we’re talking about something this serious, I always like to have hard data, like the “charts and graphs” mentioned above. To convey my preference for data over opinions, this image has been sitting on my desk for the better part of twenty years. 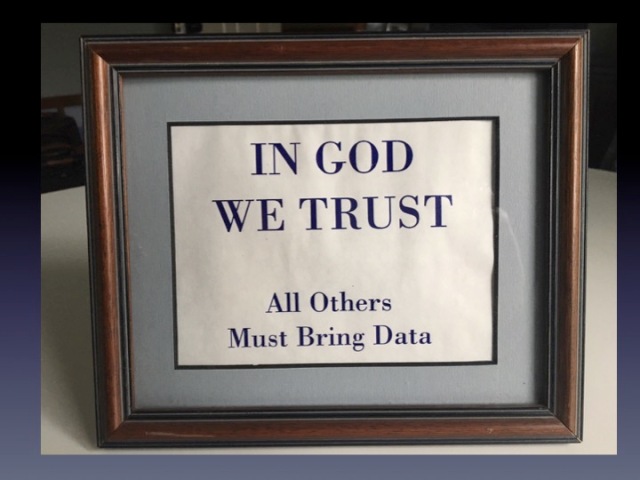 The graph below tracks the sea ice volume in cubic kilometers. The gray bars below represent the volume of Arctic sea ice in thousands of cubic kilometers at the minimum level each year (occurs in September). For the past eight years, it has been about 75% less than the volume in 1979, when satellite imaging began. When the blue line touches the red line, there will be no ice in the Arctic Ocean.

This chart is the minimum sea ice for 2018, occurring again in September. 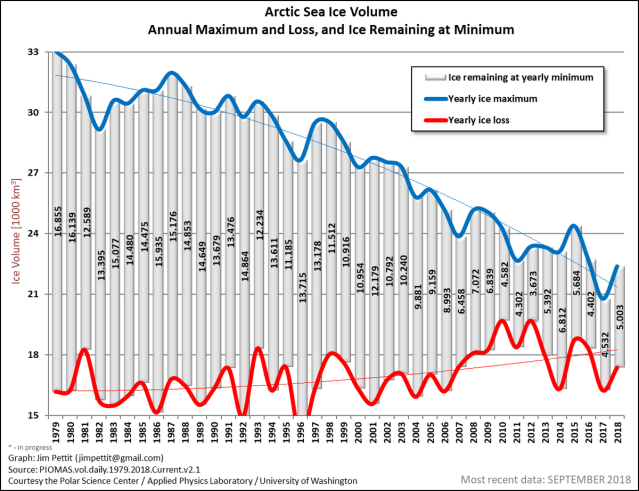 Earlier this year, I reached out via email to Dr. Peter Wadhams of the University of Cambridge to get his input on some alarming events that were taking place in the Arctic. He feared that this year would be the one where there was zero sea ice in the Arctic for at least part of September. Fortunately that did not happen, but probably will before 2023, five years from now. His response appears just below his image. 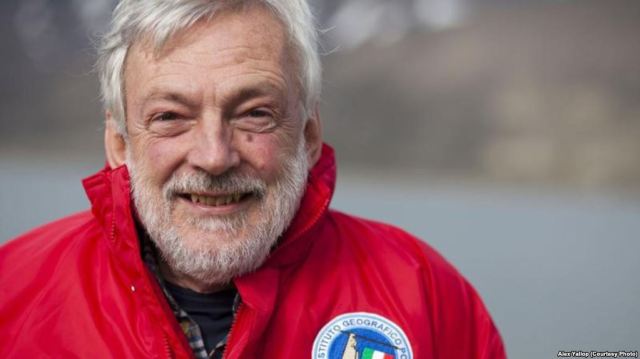 Many thanks for your message. The Arctic ice has been behaving in a new way. In terms of annual mean extent, it is lower than ever before, but the decline in volume is spread throughout the year rather than being focused on September. 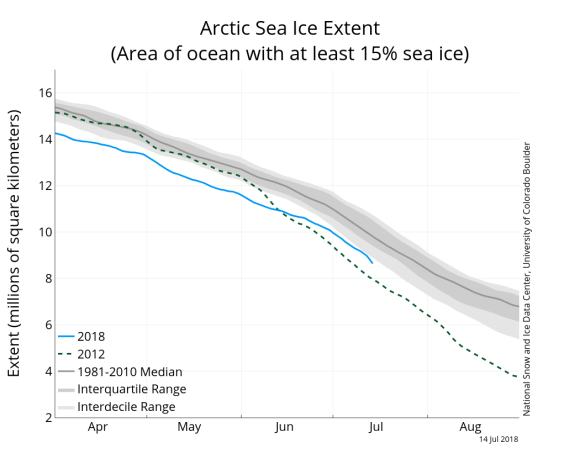 The above graph shows this – the ice extent is paralleling the average at a lower level rather than diverging from it as summer approaches, but you can also see this if you go right back to last autumn. The ice is switching to a significant decline at all seasons, so an ice-free September, previously thought to be a dire warning, may not happen .

Instead the ice just declines at all seasons until finally it goes altogether.

So, based on his recommendation, I went to nsidc.org to research the “average monthly sea ice extent” in the Arctic Ocean since August of 2017. Each of the eleven graphs that appear below cover the period since 1979 when satellite imaging of ice cover began.

Note that all of the following twelve graphs reveal that Arctic Sea Ice extent is following the same downward trend that Dr. Wadhams mentioned. 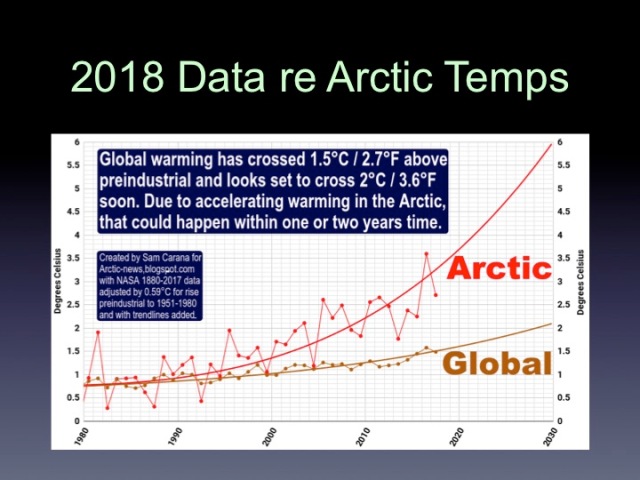 I reviewed this Sam Carana chart with Dr. Wadhams in Feb. 2018, See one minute video below.

While we’re on the topic of rapidly warming Arctic temperatures, take a look at the graph below that was recently created and posted at the Arctic News Blogspot by Sam Carana. The last datapoint is July 6, 2018. Note that this graph is just a snapshot look at one particular date (July 6) for each of  the past five years.

Given that it’s only one day over a five-year pereiod, I would like to think that the sharp temperature increase in this graph is a fluke. But given all the other data, like the above chart, I fear that these numbers may spell big trouble. 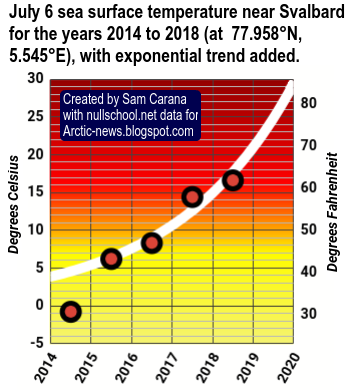 Notice that the following nine “ice extent” graphs (from October to June 2018), all seem to be telling the same grim story regarding the disappearance of ice at the top of the world.

Every single month of the year shows a sharp and continuing decline since 1979. The data is in millions of square kilometers. 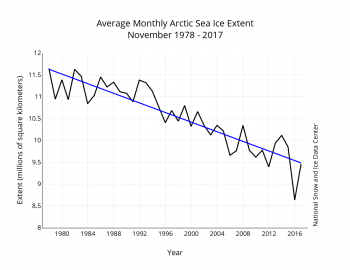 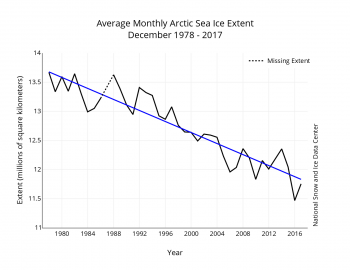 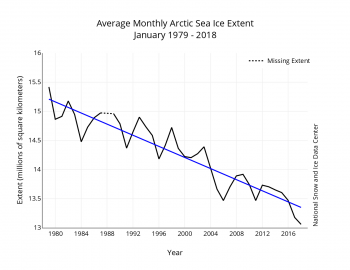 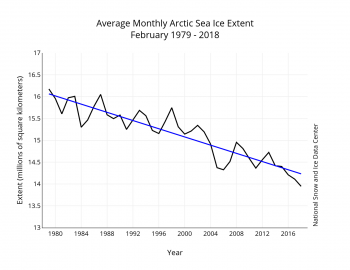 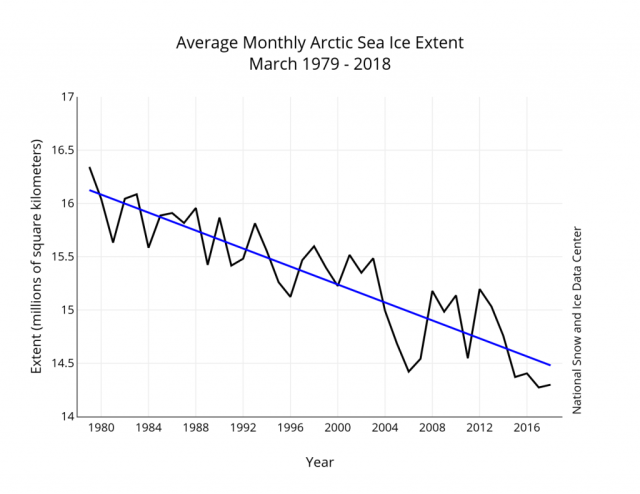 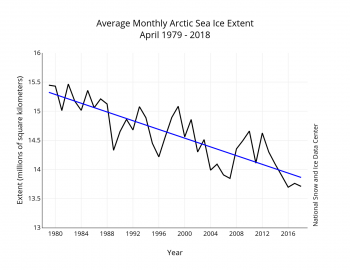 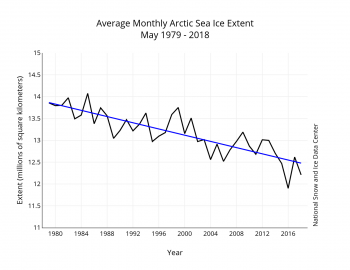 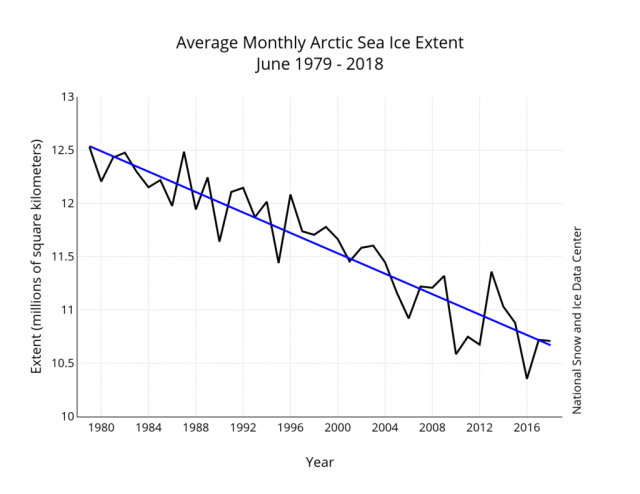 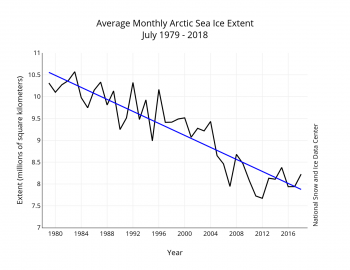 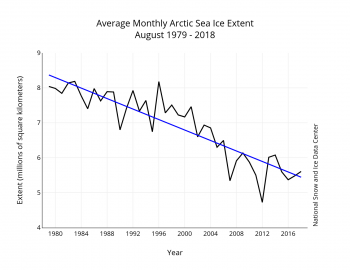 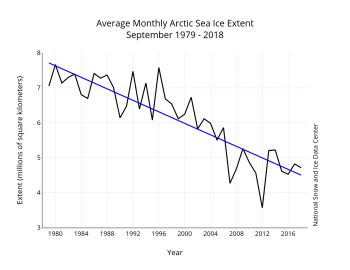 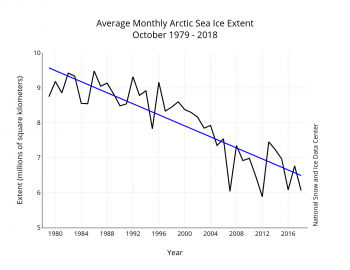 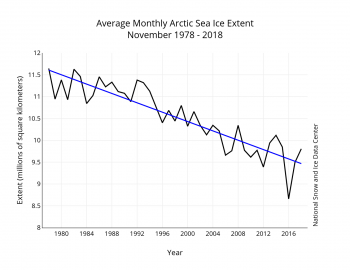 What’s next? The trend line is steadily downward for every month of the year since 1979. It’s only a matter of time before we have our first ice-free summer in the Arctic. Here are a few related BSBs on that topic.

I welcome your feedback and questions at jmorrishicks@me.com

A former strategic management consultant and senior corporate executive with Ralph Lauren in New York, J. Morris Hicks has always focused on the "big picture" when analyzing any issue. In 2002, after becoming curious about our "optimal diet," he began a study of what we eat from a global perspective ---- discovering many startling issues and opportunities along the way. In addition to an MBA and a BS in Industrial Engineering, he holds a certificate in plant-based nutrition from the T. Colin Campbell Center for Nutrition Studies, where he has also been a member of the board of directors since 2012. Having concluded that our food choices hold the key to the sustainability of our civilization, he has made this his #1 priority---exploring all avenues for influencing humans everywhere to move back to the natural plant-based diet for our species.
View all posts by J. Morris Hicks →
This entry was posted in Climate Change, Sustainability and tagged Abrupt climate change, Arctic Crisis 2018, ice-free Arctic, Peter Wadhams. Bookmark the permalink.