To end the confusion about the former president’s diet 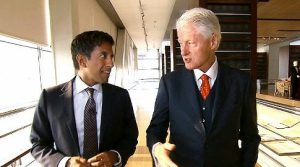 I never thought that I would hear Secretary Clinton use the word “vegan” to describe the diet of anyone in her family–certainly not until after the election. Because, as I have often said, “She knows that this country is not ready for a vegan in the White House–even if that vegan is the first gentleman.”

So, on April 18 of this year, I was stunned to hear Mrs. Clinton answering candidly a question posed by Stephen Colbert on the Late Show. Take a look for yourself during the first minute of this 4-minute video:

Back to my statement about this country not being ready to have a vegan in the White House. Could it be that just the mention of the word vegan by a leading presidential candidate could cause her to lose her polling lead against big time steak merchant, Donald Trump, the presumptive Republican nominee?

Maybe so. Consider these statements from a New York Times Op-Ed piece by Thomas Edsall this morning:

In theory, Donald Trump is eminently beatable. His negative ratings are stratospheric. He is reckless, ignorant of rudimentary policy matters and all too ready to speak without forethought or deliberation.

Still, as we near the close of the primary season, Hillary Clinton has somehow succeeded in turning the election into a close contest that she could conceivably lose. She retains key advantages in areas where Trump is vulnerable, but she has also ceded ground to him on the visceral terrain of nativism and anti-immigrant fervor, of a yearning for a return to the days of America’s unquestioned global pre-eminence.

So am I planning to vote for Clinton? My answer is that I prefer to keep politics out of this article but will tell you that I am in that majority of Americans who find neither candidate particularly attractive this year. Having said that, when it comes to my quest to promote a world-wide shift to plant-based eating, there are many advantages to having a vegan first gentleman in charge of the kitchen at The White House.

Maybe he will improve on the plant-based initiatives of his predecessor, Michelle Obama and actually promote a diet that reverses heart disease and diabetes–a whole food, plant-based diet. Maybe he will even publish a White House 4Leaf Cookbook, create videos of himself cooking delicious, heart healthy meals–chock full of whole, plant-based foods.

But what about those rumors of late that Bill has drifted away from the healthy way of eating that he learned from Esselstyn, Ornish and Campbell? This fairly recent 5-minute interview with Bill Clinton (December 2015) says otherwise:

Also in the news back in February of this year while he was campaigning in Las Vegas; from the Politico article, more proof that our former president is still practicing an almost vegan lifestyle, admitting that his doctor advises him to eat fish from time to time.

“I am not alone!” Clinton exclaimed with delight as he walked into the vegan eatery. “This is amazing. I love this place.”

Excited to discuss the vegan diet he adopted in the wake of his heart troubles, Clinton said the lifestyle “changed my life. I might not be around if I hadn’t ‘become a vegan. It’s great.”

Back to the advantages of having a “vegan first gentleman.” Just as with Michelle Obama, if someone is living in The White House, he/she wields a great deal of influence around the world, whether they are president or not. Also consider for a moment what would happen if Bill Clinton became fully enlightened to the power of plant-based eating to combat the host of sustainability issues facing our world today.

Love him or hate him, millions of people will listen to what former president Bill Clinton has to say about food choices–and their consequences to our health, our environment and out future as a species. So take your pick: 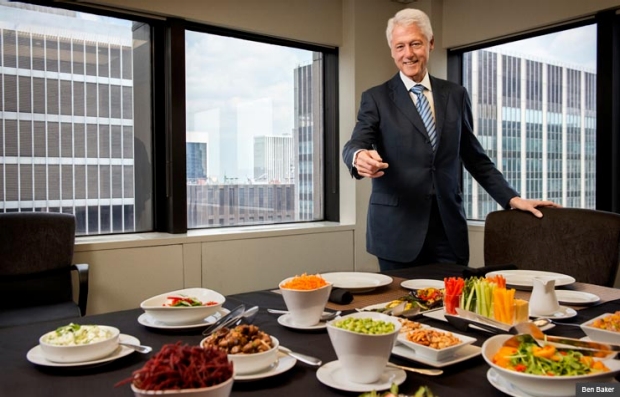 The Choice is Yours–And Mine

Just in case you missed it, here is a 9-minute video (September 2010) of former president Bill Clinton on CNN with Wolf Blitzer, who also interviews Dr. Caldwell Esselstyn and Dr. Dean Ornish. If the Clinton’s move back to The White House, many millions of people will be seeing this video and others like it. FYI, I love the way Dr. Esselstyn chooses to stress common ground truths with Dr. Ornish instead of turning the interview into a debate.