The Most Important Topic in the History of Humanity

My presentation in the classroom began by asking those college students five questions:

Building on Common Ground. After getting a 100% unanimous response to those five questions, for the next twenty minutes, I proceeded to build on that agreement in a way that would help my audience become healthier, save money, add more meaning to their lives and become far better stewards of the planet. 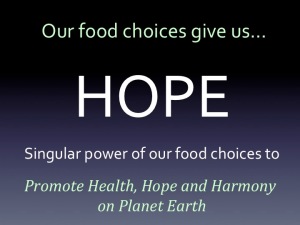 So during the time remaining, I made it clear why my talk lived up to it’s title; explaining that our food choices are without a doubt the most important topic in the history of humanity–because our future as a species is riding on those choices.

By shortening the formal part of my presentation to twenty minutes, there was lots of time remaining for Q & A and discussion. To get the ball rolling in the Q & A period, I asked them for their opinion regarding my title. Not a single one disagreed, although some of their questions signaled that they weren’t ready to do all that I was advocating. But I do believe that my talk will make a difference for the better in many of their lives. The main part of my presentation included these twenty-two questions:

Reaction from the class. At the end of my presentation, there were lots of questions and an enthusiastic discussion–and not a single student disagreed about our 21st century food choices being the most important topic in the history of humanity.

Finally, Dr. Axelson made my day when he forwarded me some unsolicited feedback from one of the students:

I just wanted to say how much I enjoyed Jim Hicks’s presentation today and that I thought it was really inspiring to see a man with such compassion. He seems like an awesome guy to know. After class, I immediately called my father and told him I am coming home with a power point in efforts of transitioning our family to a WFPBD and to show them “the big picture.” Again, I just wanted to voice that I really appreciated that Jim took his time to come in today, and that this was an awesome class today!