“Carnivores Next Door”—as the world runs out of space

With a caption of “Coming soon to your neighborhood, mountain lions,” this article reports on the wild animals that are already living in our urban space.

Have you heard about the animals that have been taking up residence in our human space? First raccoons, then coyotes, and more to follow.

But, they didn’t begin their invasion until we had commandeered their spaces for our homes, shopping centers, schools, freeways, farms, ballparks, factories and cities. A 10-5-12 article in National Geographic reported:

First it was the raccoons. Next came the coyotes. And then? Bigger carnivores. Urban and suburban areas in North America are home to a lot of small, wild predators, and now scientists believe that the coyote’s success in adapting to an urban lifestyle could pave the way for larger carnivores to move in.

“The funny thing is that now we have more people on Earth and bigger cities than ever, we also now have carnivores moving into cities. It’s a two-way street: We’re expanding cities into their territories and they’re also coming in,” said Gehrt, who also holds appointments with the Ohio Agricultural Research and Development Center and Ohio State University Extension. 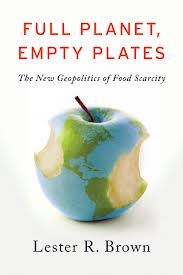 Like ours, Mr. Brown’s book features a single apple on the cover. And like ours, his apple tells a story.

Yes we do have a lot more people on Earth. After taking 200,000 years to reach 1 billion humans, we’ve been adding another billion every 13 years most recently; adding a new six billion humans in just a little over 200 years. But, having coyotes taking up residence in our backyards is the least of our problems. As Lester Brown explains in his new book, Full Planet, Empty Plates:

One of the consequences of this explosive growth in human numbers is that human demands have outrun the carrying capacity of the economy’s natural support systems— its forests, fisheries, grasslands, aquifers, and soils.

Once demand exceeds the sustainable yield of these natural systems, additional demand can only be satisfied by consuming the resource base itself. We call this overcutting, overfishing, overgrazing, overpumping, and overplowing. It is these overages that are undermining our global civilization.

Our precious planet is like this lily pond—it is just about full.

Mr. Brown paints a pretty grim picture in his book, noting that just a 3% annual growth rate will produce a 20-fold in just 100 years. In Chapter 2, he explains how the French use a riddle to teach this exponential growth concept to schoolchildren and the grim reality that it bodes for our future on this planet:

A lily pond, so the riddle goes, contains a single leaf. Each day the number of leaves doubles— two leaves the second day, four the third, eight the fourth, and so on. Question: “If the pond is full on the thirtieth day, at what point is it half full?” Answer: “On the twenty-ninth day.” Our global lily pond may already be in the thirtieth day.

Lester Brown has been trying to warn all of us for most of his career. We had better start listening soon.

In other words, our planet is currently housing about all of the humans that she can handle; particularly when you consider how inefficiently we live and eat. Lester Brown has been writing about the environment and our food supply for many years and I have featured him in my blogs from time to time. A portion of his bio summary from his new book:

Lester R. Brown is President of Earth Policy Institute, a nonprofit, interdisciplinary research organization based in Washington, D.C., which he founded in May 2001. The purpose of the Earth Policy Institute is to provide a plan for sustaining civilization and a roadmap of how to get from here to there.

He has been described as “one of the world’s most influential thinkers” by the Washington Post. He was the Founder and President of the Worldwatch Institute during its first 26 years. During a career that started with tomato farming, Brown has authored or coauthored many books and been awarded 25 honorary degrees. With books in more than 40 languages, he is one of the world’s most widely published authors.

After reading his work for the past few years, I have become even more convinced that our only feasible solution to our overcapacity dilemma is a well-planned, aggressive move in the direction of a plant-based diet for humans. But, he comes up short when it comes to what I call that urgent, “blinding flash of the obvious” plant-based solution—although he does a fabulous job of explaining the problem that all of us Earthlings face.

The Bottom Line. Although I haven’t finished reading his book, I am recommending that you buy it—for less than $10 in the Kindle format. His book reinforces what I have been writing about for 612 consecutive days. Because of our own selfish behavior in the past 100 years, we may have compromised our planet’s ability to sustain our species longterm. Click here to purchase this powerful book on Amazon.

Consecutive Daily Blogs (numerals from New Jersey, where there is not much land left for wildlife.

A former strategic management consultant and senior corporate executive with Ralph Lauren in New York, J. Morris Hicks has always focused on the "big picture" when analyzing any issue. In 2002, after becoming curious about our "optimal diet," he began a study of what we eat from a global perspective ---- discovering many startling issues and opportunities along the way. In addition to an MBA and a BS in Industrial Engineering, he holds a certificate in plant-based nutrition from the T. Colin Campbell Center for Nutrition Studies, where he has also been a member of the board of directors since 2012. Having concluded that our food choices hold the key to the sustainability of our civilization, he has made this his #1 priority---exploring all avenues for influencing humans everywhere to move back to the natural plant-based diet for our species.
View all posts by J. Morris Hicks →
This entry was posted in Sustainability, World Hunger and tagged raccoons coyotes invading urban areas. Bookmark the permalink.