Why are the “world’s greatest thinkers” missing the boat…

When it comes to fighting world hunger, global warming, etc.?

Mr. Cribb’s book, one that we researched extensively for our book

Let’s take world hunger. Julian Cribb wrote a great book called The Coming Famine. Lester Brown wrote World on the Edge. Both authors are brilliant men and both books are masterpieces. They are both very well written and contain a great deal of information. Yet neither of the authors focus clearly on the number one cause (and obvious solution) of the problem. Why is that?

They both probably know that you can feed well over ten times as many plant-eaters on the same amount of land that is required to feed one meat-eater. Just think of the implications. With an aggressive shift toward plant-based eating—by 2050, we’d be able to feed the world’s nine or ten billion humans on less than half the land that we’re currently using to feed seven billion.

So why aren’t they talking about this obvious solution? One of my readers, Linda Dale, posted a comment recently that inspired this blog. First, her comment, then my response.

Jim, I so appreciate your good intentions and dogged determination, but I still don’t think that trying to convince people that they don’t “need” animal protein is the answer. There are many, many things people don’t need, and they know they don’t NEED them, they just WANT them.

Americans, in particular, aren’t willing to deny themselves the things they WANT as long as they can afford to buy them. Everybody I know who eats meat eats it because they like the taste, not because they think they need protein. The problem is, as I see it, is that the vast majority of people haven’t heard or read often enough how bad animal products are for their health. THAT is the information that needs to get out. Most people do care about themselves (if not the animals) and want to live longer and healthier lives. Maybe they can be motivated if we direct our efforts to their selfish concerns.

J. Morris Hicks, always focusing on the “blinding flash of the obvious” solution to the world’d most pressing issues: food, water, and global warming.

Hi Linda, Thanks for your comment. You’re right, most people don’t want to hear about what they don’t “need.” They just care about what that want. But the point I am trying to make is more subtle.

As you know, there are many global issues that are driven by what we eat. For example: Cost of healthcare, global warming, adequate water supply and enough land to feed the world’s steadily increasing population. There are many very smart (and very educated) people out there who are are spending their entire lives working on these critical global issues—but they appear to be missing the most powerful solution to all of them.

I have concluded that they don’t even consider this “obvious solution” because of their collective perception about our need for protein. You’ve no doubt heard this age old question a zillion times, “If you don’t eat meat or dairy, where do you get your protein?” 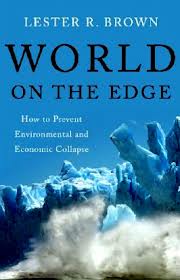 Just one of Mr. Brown’s fifty books; this one is endorsed by Bill Clinton and Ted Turner.

One of those highly educated and extremely influential people is Lester Brown. Like most of our elected officials, great thinkers and world leaders—he never even mentions the “plant based solution” to the host of environmental and social problems that he has spent his life researching.

My whole point is that until we “dispel this protein myth,” then we’ll not enjoy the benefit of great thinkers like Mr. Brown when it comes to promoting—and leading—an aggressive shift toward a plant-based diet for humans. Right now, there’s only a few hundred of us out spreading the word about plant-based solution, and we’re going to need millions more to change the world. Mr. Brown would be a great guy to have on our team.

From Wikipedia: Lester Brown. Noted author with over 50 books, the founder of WorldWatch Institute, Founder & President of the Earth Policy Institute, the recipient of 26 honorary degrees and a MacArthur Fellowship; Mr. Brown has been described by the Washington Post as “one of the world’s most influential thinkers.”

Enjoy this 5-minute video of Mr. Brown and just imagine how many people he could reach if he started promoting the “blinding flash of the obvious” plant-based solution.

My message is not new. The world-saving message that I am broadcasting every single day is not something new. And I’m not the only one that believes this message is the most important message in the history of the human race. The United Nations and Albert Einstein agree.

United Nations. “A global shift towards a vegan diet is vital to save the world from hunger, fuel poverty and the worst impacts of climate change,” according to a UN report, June 2, 2010. “As the global population surges towards a predicted 9.1 billion people by 2050, western tastes for diets rich in meat and dairy products are unsustainable,” says the report from United Nations Environment Programme’s (UNEP) international panel of sustainable resource management. (See link to my post on this topic)

Albert Einstein. “Nothing will benefit human health and increase chances of survival for life on earth as much as the evolution to a vegetarian diet.”

If the U.N. is saying it and Albert Einstein said it; then why are there not more of the world’s greatest thinkers now urgently talking about the obvious solution?

During the past year, I have spoken at 20 or 30 mainstream venues. By mainstream, I mean that these audiences had no predisposition to favoring a plant-based diet. Based on their questions, it is painfully obvious that 95% of them still think that we “need” to eat animal protein to be healthy.

A former strategic management consultant and senior corporate executive with Ralph Lauren in New York, J. Morris Hicks has always focused on the "big picture" when analyzing any issue. In 2002, after becoming curious about our "optimal diet," he began a study of what we eat from a global perspective ---- discovering many startling issues and opportunities along the way. In addition to an MBA and a BS in Industrial Engineering, he holds a certificate in plant-based nutrition from the T. Colin Campbell Center for Nutrition Studies, where he has also been a member of the board of directors since 2012. Having concluded that our food choices hold the key to the sustainability of our civilization, he has made this his #1 priority---exploring all avenues for influencing humans everywhere to move back to the natural plant-based diet for our species.
View all posts by J. Morris Hicks →
This entry was posted in Big Picture, Climate Change, Harmony Project, Sustainability, Video Included, World Hunger and tagged Lester Brown. Bookmark the permalink.