My silence has ended—and I have a lot to report.

Update on our SOS Global Initiative — a massive awareness campaign aimed at preserving our planet’s ability to sustain our species indefinitely. 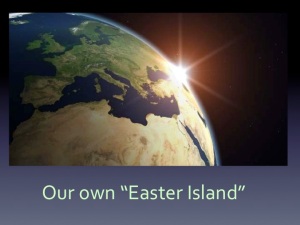 With the deadly combination of overpopulation, over-consumption and limited resources.

My last blogpost was over a month ago—39 days to be exact. Some of my readers have reached out to find out why I had suddenly gone silent; so now I will share that information with everyone.

First, let me say that I have never felt better about my role on this planet and am looking forward to a highly productive and gratifying future.

A little background. Over the past few years, I have shifted away from talking about “saving the planet,” having concluded that the planet is going to be just fine. She’s been supporting life for billions of years and has seen millions of species come and go. And no matter how much damage our species inflicts on her—she will survive. It’s our future as a species that’s in jeopardy.

Once a lush tropical island with a thriving population of 15,000, they consumed their finite resources and their civilization collapsed.

Hopefully, we won’t go the way of the Rapa Nui on Easter Island (link contains video), who wastefully depleted their finite resources until their civilization collapsed. Although we humans have inflicted more damage on the fragile harmony of nature in just the last fifty years than all generations of humans before us (combined)—we still have time to reverse that deadly trend. But we URGENTLY need to get started in a big way.

So for the past two months, I have been positioning myself to do all that I can to help facilitate the urgent lifestyle changes necessary to reverse the deadly trends. As I always say, any worthwhile project begins with vision and leadership. So, in chronological order, here is what has transpired:

9-5 My first letter to James Cameron. (via email to his assistant). Having concluded that he was the most influential person in the world who truly “gets it” about the world-changing consequences of our food choices, I decided to reach out to him.

9-5 Ten hours later, we (Colin and I) were invited to dinner in Malibu. Knowing that Forks Over Knives had greatly influenced the Cameron family, I had requested that Mr. Cameron agree to a two-hour meeting with me and Dr. T. Colin Campbell.

9-14 Dinner at the Cameron’s Malibu home. The two-hour meeting request resulted in a full six hours at the Cameron residence; four hours of meeting and two hours of dining. It was one of the most exhilarating experiences of my life.

The highway billboard promoting my 9-21-13 speech in Tucson, AZ

9-21 Speaking to 500+ in Tucson at the Healthy You Network conference. This event had been booked for months but I didn’t finalize my presentation until after the Cameron event in California. The mostly vegan crowd absolutely LOVED hearing that prominent people like Jim and Suzy Cameron were getting serious about the species-saving mission of promoting plant-based eating around the world.

9-29 Signed speaker contract with ExploreGreen.com My friend Susan Benigas introduced me to the founder (Paul Zemitzsch) of Explore Green, a speakers agency that focuses primarily on environmental and sustainability topics. And since public speaking is my primary means of earning a living these days, I have packaged myself as a sustainability specialist—with a heavy emphasis on the crucial importance of our food choices.

10-4 and 5. My first international speaking engagement in Italy. I flew into Rome on October 3 and was met by my client, who drove me across the mountains to San Benedetto del Tronto on the Adriatic Sea. I was privileged to speak through an interpreter to a highly enthusiastic group at the inaugural conference of La vita e bella, founded by Susanna Piccioni earlier this year.

10-6. Was driven to Rome by the Managing Director of the Raphael Hotel there. Roberto Vannoni had attended one of my lectures and was most interested in the species sustainability issues that I presented. During our three-hour trip, we discussed the possibility of his reaching out to Pope Francis with our world-changing, species saving message. There are 1.2 billion Catholics in this world who might like to learn how to promote their own health while preserving the planet’s ability to sustain our species.

10-9 Meeting with Dr. Stephen Emmott in London. After four days in Italy, I flew to London for a short vacation. But I gladly took the time to visit with the top Microsoft scientist who had published his book TEN BILLION the month before. I had asked for 30 minutes, he gave me 75 and we had a great discussion about how we could launch an “asteroid” type project to greatly curb global depletion by influencing the top two billion people in the world to shift aggressively in the direction of plant-based eating.

10-11 James Cameron calls a meeting. As I was de-planing in Newark, NJ, after my flight from Heathrow—and less than one month after our Malibu meeting, I received word that Mr. Cameron had scheduled a plant-based summit for November 24 at the Cameron’s Santa Barbara ranch. Stay tuned for more news on this all-important process.

My new Harbor Point neighborhood in Stamford, CT. You can see I-95 and the trains from my office.

10-12 through 10-31. Moving from Stonington to Stamford. In order to better position myself for an extensive schedule of speaking and consulting, I had made the decision in August to move closer to New York.

I am now a just six minute walk from the Stamford train station and I-95, both of which I can see from my desk at my new home. Although moving is never any fun, this time I was able to greatly simplify my life, unload a ton of STUFF and position myself for focusing my mind on what’s most important. And what could be more important than the longterm sustainability of humankind?

10-24 Appeared on the Dr. Don Wagner Show in Arizona. This is about the fifth time that I have appeared on his show since my book came out two years ago. This one took place amid a sea of moving cartons on my last night in my Stonington home.

10-27 Conducted a PowerPoint Presentation via Skype with a vegan group in Canada.

In summary, it’s been a great two months: getting to know Jim and Suzy Cameron, speaking to over 500 people for the first time, my first international speaking engagement (with translator), spending time with Dr. Stephen Emmott, and conducting my first ever Skype presentation to a live audience.

Now, with my move behind me and my head cleared, I am all set to devote my full attention to doing all that I can to make our S.O.S. Global Initiative successful. One of the highlights of my trip was meeting these two wonderful people shown here. Peggy Straus on the left is the granddaughter of the great Max Gerson. On the right is Susanna Piccioni, the founder of the conference where Peggy and I both conducted lectures.

Peggy Straus, granddaughter of Dr. Max Gerson on the left and Susanna Piccioni on the right.

For your convenience, I have posted below some of the blogs that were mentioned above.

A former strategic management consultant and senior corporate executive with Ralph Lauren in New York, J. Morris Hicks has always focused on the "big picture" when analyzing any issue. In 2002, after becoming curious about our "optimal diet," he began a study of what we eat from a global perspective ---- discovering many startling issues and opportunities along the way. In addition to an MBA and a BS in Industrial Engineering, he holds a certificate in plant-based nutrition from the T. Colin Campbell Center for Nutrition Studies, where he has also been a member of the board of directors since 2012. Having concluded that our food choices hold the key to the sustainability of our civilization, he has made this his #1 priority---exploring all avenues for influencing humans everywhere to move back to the natural plant-based diet for our species.
View all posts by J. Morris Hicks →
This entry was posted in Activism & Leadership, Big Picture, Environment, Sustainability and tagged James Cameron, James Cameron vegan. Bookmark the permalink.

27 Responses to My silence has ended—and I have a lot to report.