Good News and Bad News — an Update on Oil

We hear a lot about the price of oil and gasoline in the Western world—particularly during an election year in the United States. Four years ago, McCain and Palin were irresponsibly screaming, “Drill baby drill,” and now Newt Gingrich is (was) promising a plan for delivering gasoline for $2.50 a gallon if he is elected. Some of this kind of “madness” is necessary to get elected in a country like ours—where the electorate blames the sitting president for unemployment numbers and for the price of gasoline. But none of this kind of “madness” is going to solve the grim reality of our collective global dependence on oil.

All the talk about the price of gasoline during this election year—coupled with the latest article on the cover of Time (see link below)—has influenced me to write an update on this crucial topic. Crucial not just for getting elected, but crucial for the survival of our species if we mis-manage the finite resources that we have left.

A little background. Chapter 5 in our book is entitled “The End of the Era of Cheap Oil,” — not a chapter you would normally expect to see in a book about healthy eating. But our book goes far beyond our own health and takes a hard look at four other compelling categories of reasons that we should be eating whole plants—not animals and their products.

As for oil, it turns out the the way we eat is the single largest category of how we are “wasting” this finite resource. The small print on the cover of the magazine gives us a clue about the “good news and bad news” in the article: 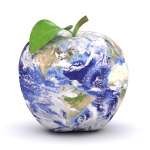 What's good for our health, is also good for the planet---and for conserving oil.

Many of my blogs have featured all of the five categories of compelling reasons and can be reviewed by hovering over the “Topics” tab above. This particular blog is an update on the “energy issues” topic—particularly the future availability of cheap oil. What do I mean by cheap? I mean “cheap enough” to squander in a process so insanely inefficient as producing food calories  in the form of meat and dairy. Insanely inefficient?

On average, meat and dairy calories require more than ten times as much fossil fuel energy to produce—on a per calorie basis—than do whole, plant-based foods.

Oh, we waste a lot of energy with our plant-based foods too, but that waste is a mere drop in the bucket compared to our meat and dairy production business. In our book, we reported that the process of “cycling” our grain through animals for our food is a process that wastes “90% of the protein, 96% of the calories, 100% of the fiber and 100% of the carbohydrates.” It also requires over ten times as much land and water—but this article is focused on the energy side of this mess.

Example of "peak oil." All countries, and eventually the world, will reach its peak oil production.

Back to the Time article. Bryan Walsh gives us a comprehensive “big picture” of what’s going on with our oil supply, although he hardly even mentions the “peak oil” phenomenon. Simply stated, peak oil means that eventually the world’s daily production of oil will peak and—no matter what we do—the grand total daily production of oil will steadily decline. What we’re now seeing in the Time article appears to be the reality of the early years of peak oil. Many experts believe that we’re at peak oil now.

What Mr. Walsh describes is five new “categories” of oil production that has been made possible by a combination of new technology and price. In other words, we now have the high-tech tools to dig deeper and differently—AND the higher prices are making those more expensive methods economically feasible.

Is peak oil a myth or a hoax? Like global warming, there is much debate surrounding this topic. But there is universal agreement on these three points:

How much oil is harvestable in the future? My earlier research for the book seems to be corroborated by the Time article—that is that we have roughly one trillion barrels remaining. And since we’ve used the majority of our first trillion in less than fifty years, we know that the last trillion barrels are not going to last forever. From the article, Walsh sums up the “big picture:”

While unconventional sources promise to keep the supply of oil flowing, it won’t flow as easily as it did for most of the 20th century. The new supplies are for the most part more expensive than traditional oil from places like the Middle East, sometimes significantly so. They are often dirtier, with higher risks of accidents.

The decline of major conventional oil fields and the rise in demand mean the spare production capacity that once cushioned prices could be gone, ushering in an era of volatile market swings. And burning all this leftover oil could lock the world into dangerous climate change. “I’m less concerned about the absolute disappearance of fossil fuels than about the environmental consequences of pursuing what’s left,” says Michael Klare, an energy expert and the author of The Race for What’s Left. There will be oil, but it will be expensive, dirty and dangerous.

Gorilla in the room–NEW DEMAND. Although the USA and other Western nations are actually using less oil these days, demand continues to grow sharply in the developing world. Specifically, millions of people in China and India are just now beginning to drive automobiles. And the oil market is global—which means that we can’t control the prices. And that “we” means Newt, McCain/Palin, or Barack Obama. The price of oil—for as long as we have it—will fluctuate based on the global supply and demand.

The Bottom Line. The single largest opportunity to conserve this finite natural resource is to change the way we eat in the Western world. Certainly, it will also help if we change the way we live at the same time—it would just take a lot longer to to that.

As an added bonus for changing the way we eat, we’ll also lessen the future energy demand in the developing world as they follow our lead by choosing the healthier, more efficient and far greener option of eating whole plants. What could be simpler?

Want to learn more about the “energy issues?” Click here.  And for the Time article….

Time Article The Truth About Oil

Got a question? Let me hear from you at jmorrishicks@me.com.

—J. Morris Hicks, Board of Directors…

A former strategic management consultant and senior corporate executive with Ralph Lauren in New York, J. Morris Hicks has always focused on the "big picture" when analyzing any issue. In 2002, after becoming curious about our "optimal diet," he began a study of what we eat from a global perspective ---- discovering many startling issues and opportunities along the way. In addition to an MBA and a BS in Industrial Engineering, he holds a certificate in plant-based nutrition from the T. Colin Campbell Center for Nutrition Studies, where he has also been a member of the board of directors since 2012. Having concluded that our food choices hold the key to the sustainability of our civilization, he has made this his #1 priority---exploring all avenues for influencing humans everywhere to move back to the natural plant-based diet for our species.
View all posts by J. Morris Hicks →
This entry was posted in Energy and tagged end of cheap oil, peak oil, renewable energy, ways to save oil. Bookmark the permalink.