We know they’re finite…but we’re using them as if they will last forever. 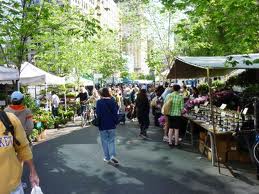 The residents of New York City are among the most energy efficient of all citizens of the United States. They achieve that distinction by being exceptionally efficient in two out of three of our primary energy usage categories: our homes and our transportation.

But, for the other category, they are no better than the rest of the United States. That third category is the energy that is going into the production of our food supply. And that’s the category that offers the single best opportunity to prolong the finite supply of our fossil fuels (oil, coal and natural gas) – until renewable alternatives can be developed.

So how much could we save on that food supply category? While researching for our book, we found that approximately one third of our fossil fuel consumption (in the USA) goes to the production of livestock for our dinner tables. We also found that on a per calorie basis, it takes twenty times more energy for animal-based foods as compared to the highly efficient whole plant foods. That means that if we all shifted to eating mostly plants, we could lower our nation’s total fossil fuel consumption by 30 percent.

Subway travel in New York, the ultimate in transportation efficiency

So how can we get the ball rolling such that the average citizens are aware of our impending energy crisis and understands what they each can do to minimize the disruption to our lives when the era of cheap oil comes to a screeching halt? Until oil prices go through the roof, what can we do to influence them to change their behavior now?

We can help them understand the “big picture” about our energy supply and why they might be real smart to start living more efficiently — sooner rather than later. We can make an effort to install more home solar panel systems to cut down on our energy consumption and save money. For example, companies like California’s Verengo Solar, offering custom home solar installation, are making it easier for homeowners and ordinary citizens to join in the fight for cleaner, sustainable energy.

Chapter 5 in our book is entitled “The End of Cheap Oil” and reports on a phenomenon called “peak oil” that experts project will happen between within the next ten to thirty years. Some of the more notable experts believe that it has already happened. “Peak oil” is when the entire world’s production level hits a peak and then gradually declines indefinitely. And without abundant renewable fuels to replace that oil, prices are expected to rise sharply as the world markets realize that we have hit that peak. So what can we do to prepare for that peak? The short answer is that we can get real serious about reducing our consumption now – and thereby give our scientists more time to develop those renewable sources of energy.

My three tips for saving our finite fossil fuels.

One thing that might help the average citizen make better choices in the above three categories would be a projection of prices for the next fifteen years — for a key energy indicator, such as the price per gallon of gasoline. If you knew that the price of gasoline would go up an average of fifty cents a gallon, every year, for the next fifteen years; how would that information affect your lifestyle choices? That means that gasoline would cost $6/gallon in 2016, $8 in 2020 and $11 in 2026. My personal feeling is that those numbers are realistically possible and maybe even a bit conservative.

The problem is that no government officials are likely to announce what’s likely to happen with the cost of energy – even if they knew. Because they’d be afraid of losing votes with anyone involved with any of the industries that might be adversely affected by projections of sharply higher energy costs: automobile, meat & dairy, travel and real estate to name just a few.

As unpopular as it is to say, I truly believe that rising cost of energy today will turn out to be our best friend in the years ahead. For it will force us to consume less energy, ensure that our finite supply of fossil fuels last a few years longer and give us time to gradually adjust to a world after the era of cheap oil. It will also force us back to a much kinder and gentler treatment of our precious planet.

Click here for a blog post that addresses this entire “peak oil” phenomenon. Includes three videos. If you like what you see here, you may wish to join our periodic mailing list. Also, for help in your own quest to take charge of your health, you might find some useful information at our 4-Leaf page. From the seaside village of Stonington, Connecticut – Be well and have a great day.

A former strategic management consultant and senior corporate executive with Ralph Lauren in New York, J. Morris Hicks has always focused on the "big picture" when analyzing any issue. In 2002, after becoming curious about our "optimal diet," he began a study of what we eat from a global perspective ---- discovering many startling issues and opportunities along the way. In addition to an MBA and a BS in Industrial Engineering, he holds a certificate in plant-based nutrition from the T. Colin Campbell Center for Nutrition Studies, where he has also been a member of the board of directors since 2012. Having concluded that our food choices hold the key to the sustainability of our civilization, he has made this his #1 priority---exploring all avenues for influencing humans everywhere to move back to the natural plant-based diet for our species.
View all posts by J. Morris Hicks →
This entry was posted in Energy. Bookmark the permalink.