No mention in the paper that brings us “all the news that’s fit to print.”

Guess the New York Times didn’t think that the U.N.’s World Environment Day was newsworthy. Ditto for CNN, NBC, CBS, ABC, Fox and the rest of our mainstream media. The BIG news on CBS This Morning was the all-important, world-changing story about performance enhancing drugs in baseball.

A Google search yielded a story published by the United Nations, the sponsor of the event. And, if hadn’t been for this picture in our local New London Day in southeastern Connecticut, I still wouldn’t know about it. 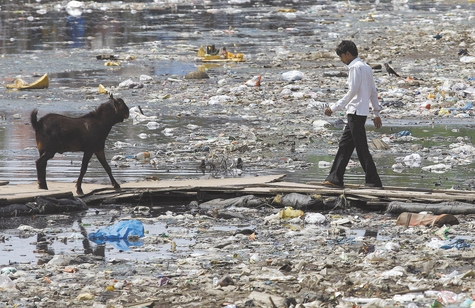 An Indian man and a goat walk through a canal polluted with plastic bags and other garbage Tuesday in Mumbai, India. World Environment Day is celebrated June 5 every year by the United Nations to stimulate global awareness on environmental issues.

After noticing this photo, I immediately checked the “World” section of the New York Times on my iPhone and was surprised to see that there was no mention of World Environment Day. But there was one article that caught my attention, Diabetes Is the Price Vietnam Pays for Progress.

It reminded me of an SNL joke last year about the most significant “product” made in the USA—DIABETES. (Link to my blog provided below—with video). The Times article about Vietnam began:

HO CHI MINH CITY — He survived the deprivation of the Vietnamese countryside and decades of war, but Pham Van Dang, 70, lay dazed in his hospital bed, the stump of his freshly amputated leg sewn up like the seams of a leather bag. Mr. Dang and many younger patients in the diabetes ward here at Nguyen Tri Phuong Hospital are casualties of rising affluence, his doctor says.

“I see more and more patients with diabetes,” said Dr. Tran Quang Khanh, who is chief of the endocrinology department, whose ward receives 20 new patients a day. The precise reasons for a spike in diabetes cases are hard to pin down — people are living longer, for one — but doctors in Vietnam say the prime culprits are “Westernization and urbanization.”

“Now we have KFC and many fast-food restaurants,” Dr. Khanh said.

A great cause that no one seems to know about

World Environment Day? Obviously this noble effort by the United Nations is not getting the job done. Our many environmental issues are primarily driven by the way we have chosen to feed ourselves in the developed world.

We now have 7 billion people on our planet and more people are choosing our extremely wasteful and harmful typical western diet every day.

As a result, more people in Asia are getting diabetes, we’re squandering our precious natural resources and world hunger is becoming a bigger problem every year. It’s all connected to the fact that we are no longer living in harmony with nature and the rest of our planet. And the single biggest problem is the way we eat—because that determines how the world is used.

World Environment Day in the news? I did find one “picture story” in The Indian Express. Here is one of the photos that caught my eye. Poverty, world hunger, sustainability, and poor health—all captured in one photo.

Women search for recyclable items among heaps of rubbish at a municipal waste dumping site on World Environment Day in Dimapur, Nagaland.

Saving the planet? During the past year, I concluded that we really should not be worrying about saving the planet. Mother Earth has been providing life for four billion years and she has seen many species extinctions. Mother Earth is going to be just fine; what’s at stake is our future as a species. Consider this:

If the 4 billion years of life on Earth was just 365 days—the human population has grown from one billion to seven billion in the last two seconds of the last hour of the last day of that year. And in the last half second (50 years), we humans have inflicted more damage to the harmony of nature than all generations of humans combined for the past 200,000 years.

The Bottom Line. Once-a-year Earth Days and World Environment Days are not getting the job done. We need for the world’s most powerful leaders to work constantly on the host of sustainability issues that we face. Addressing the way we eat is the single most important issue that they must tackle. The folks at the United Nations know what needs to be done—but apparently few are listening. From their website:

“A global shift towards a vegan diet is vital to save the world from hunger, fuel poverty and the worst impacts of climate change.” according to a UN report, June 2, 2010.

Finally, Dr. Campbell said it best in his new book, WHOLE, “No less than our future as a species hangs in the balance.”

The diabetes in Vietnam is just the tip of the iceberg, but it is a great example of the pain, suffering, cost and damage that those of us from the wealthier countries are spreading around the world. The Times article continues:

Diabetes rates are surging in many countries, but it is a particularly poignant paradox that, after so many years of war in Vietnam, peace is now partly marred by the afflictions of rising prosperity: clogged hearts, obesity and diabetes. Official statistics in Vietnam show a vertiginous increase in Type 2 diabetes overall, the form of the disease that is linked to diet and lifestyle and in the West has reached epidemic levels, especially among the obese.

Dr. Khue said diabetes was once the preserve of the very wealthy. But as people have moved from rice paddies into factories and offices, her patients today are from all walks of life. “It’s not the disease of the very rich anymore,” she said. “Now poor and rich — everyone — can get diabetes.”

For your convenience, here are the related links for today’s blog.

A former strategic management consultant and senior corporate executive with Ralph Lauren in New York, J. Morris Hicks has always focused on the "big picture" when analyzing any issue. In 2002, after becoming curious about our "optimal diet," he began a study of what we eat from a global perspective ---- discovering many startling issues and opportunities along the way. In addition to an MBA and a BS in Industrial Engineering, he holds a certificate in plant-based nutrition from the T. Colin Campbell Center for Nutrition Studies, where he has also been a member of the board of directors since 2012. Having concluded that our food choices hold the key to the sustainability of our civilization, he has made this his #1 priority---exploring all avenues for influencing humans everywhere to move back to the natural plant-based diet for our species.
View all posts by J. Morris Hicks →
This entry was posted in Diabetes, Environment. Bookmark the permalink.