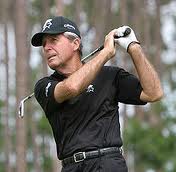 Now an honorary starter in Augusta

Ever since I was a little boy learning to play golf in Greenville, Mississippi, back in the 50’s, I have thought that Gary Player was really cool. It was something about his style and attitude that appealed to me.

Little did I know way back then that this dynamic golfer would eventually rack up more victories than anyone in the world—including the legendary greats like Snead, Palmer, and Nicklaus. Born in 1935, one year after the first Masters, he has won 165 tournaments in his career—and has three green jackets.

Also, little did I know back then that I would someday learn a great deal about some of Gary’s secrets to his exceptional performance. If you caught the “Par 3” contest from Augusta National on Wednesday, you may have noticed that Gary (at 76) still maintains his trim vitality at about 150 pounds and looks much younger—and healthier—than his playing partners Nicklaus and Palmer.

On Wednesday, Gary joined Jack and Arnie as honorary starters for the first time. Still healthy enough to compete at 76, I think the club officials may have lured him away from the starting tees by offering him this honor. Normally, a former Masters champion may compete in the annual tournament for as long as he wishes.

What does Gary eat? For the record, Gary describes himself as “90% vegetarian” and says  that since reading The China Study, he now plans to remove animal products from his diet completely. In addition to his superior diet, Mr. Player is also a fitness enthusiast and has a great deal of mental motivation as well. 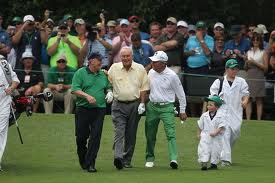 As for his diet of mostly plants, I have no doubt that he would tell you that it has been a major factor in his success as a professional golfer. Just this week, I heard him say in an interview that strength conditioning among golfers has become much more popular in the last 15 years. “The next big thing will be improving what we eat,” he says.

As for poor Jack and Arnie—they are not looking so good. I wonder what they all had to eat at Tuesday night’s “Past Champions Dinner” hosted this year by a South African countryman of Mr. Player. My guess is that Gary may have had a small bite of the main “meat” course out of courtesy for the host but that he probably got most of his calories from the sides of vegetables. And, for making those healthy choices, he probably got a bit of ribbing from his aging, unhealthy, and  overweight golf buddies.

“Dr. Colin Campbell’s book is fantastic and yes it has played a part in my dietary intake. He really opened my eyes about the dangers of eating too many animal proteins and how the body benefits more from plant based foods. I think that everyone should read his book; it will change how people eat and structure their diet. Imagine if we could get parents and children to read this book together! It could make a significant impact on childhood obesity and educate parents about how to properly feed their children.

There are 2 quotes that really resonate with me and have helped drive my commitment to fighting childhood obesity; “More people die today from too much food than from too little” and “The human race has never been more unhealthy as it is today”. This says something to me!” 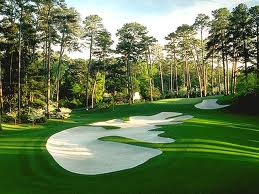 One of the most beautiful places on Earth

This is Masters Week—my favorite sporting event of the year. As most people know, the Masters is one of golf”s four major tournaments—but it is the only one that is held in the same location every year. That location is the Augusta National Golf Club, founded by the late Bobby Jones, a famous amateur from Georgia who won golf’s “grand slam” in 1930.

Luckily, I had the opportunity (work related) to attend the 1992 and the 1993 Masters, won by Fred Couples and Bernhard Langer respectively. While walking through that majestic place for the first time in April of 1992, I was having trouble thinking of the right word to describe it. Finally, I settled on “ethereal”— a place that seems too perfect for this world.

Not quite perfect yet. Yes, there is still one thing about the Masters that is not perfect—and we hear about it every year about this time. It is their ongoing refusal to admit women members to this most prestigious golf club in the world. Ten years ago (during the Martha Burk controversy), I wrote an article about that imperfection and mailed it to Chairman Hootie Johnson with a copy to the legendary Atlanta sports-writer, Furman Bisher, who passed away last month. (See link to that article below)

In that article, I outlined a simple “solution to their problem,” one that they obviously failed to execute. But now, things are getting a little more dicey—the new CEO of IBM, one of their major sponsors is a woman. And, the club has invited the previous four CEOs from IBM to join the club. In an article this week in the New York Times, a female writer describes the dilemma of the PGA commissioner:

Tim Finchem, the PGA Tour commissioner, has to justify why the tour continues to recognize the Masters as an official event despite the PGA mandate that its tournaments take place at clubs with nondiscriminatory membership practices.

As we saw on Wednesday, “A restroom can be repaired in a day, but a club founded in 1933 on the bedrock of segregation is obviously not so easily rebuilt — or even touched.”

So, it’s been ten years since my own article on this subject—and little has changed. But something tells me that long before 2022 (ten more years), there will be women members of this legendary place—and the “ethereal” feel of Augusta National will be even sweeter.

Want to hear about my “simple solution?” I still think that it would be a good place to start. My 2002 article for your convenience (FYI, it has nothing to do with food)

Do you think you’re eating as healthy as Gary Player? He sounds like a 3Leaf-er on is way to 4Leaf. Take our free 4Leaf Diagnostic Survey and find out. It takes less than five minutes and you can score it yourself. After taking the survey, please give me your feedback as it will be helpful in the development of our future 4Leaf app for smartphones. Send feedback to jmorrishicks@me.com

Got a question? Let me hear from you at jmorrishicks@me.com.

—J. Morris Hicks, Board of Directors…

A former strategic management consultant and senior corporate executive with Ralph Lauren in New York, J. Morris Hicks has always focused on the "big picture" when analyzing any issue. In 2002, after becoming curious about our "optimal diet," he began a study of what we eat from a global perspective ---- discovering many startling issues and opportunities along the way. In addition to an MBA and a BS in Industrial Engineering, he holds a certificate in plant-based nutrition from the T. Colin Campbell Center for Nutrition Studies, where he has also been a member of the board of directors since 2012. Having concluded that our food choices hold the key to the sustainability of our civilization, he has made this his #1 priority---exploring all avenues for influencing humans everywhere to move back to the natural plant-based diet for our species.
View all posts by J. Morris Hicks →
This entry was posted in Celebrities, Health in General. Bookmark the permalink.