No meat or dairy for President Clinton — CNN this Sunday

Bill Clinton on CNN in September of 2010.

This could be a world-changing telecast.

Yesterday in an article by David S. Martin on CNN Health, it was announced that there will an airing of a special on Sunday, August 21, 2011, of a special featuring former President Bill Clinton. It is entitled “The Last Heart Attack” and will air Sunday evening at 8 p.m. ET.

Editor’s note: Tune in as Dr. Sanjay Gupta explores the signs, tests and lifestyle changes that could make cardiac problems a thing of the past. 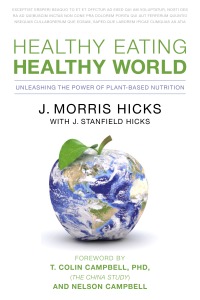 Endorsed by Dr. Ornish (on the front cover) Dr. Esselstyn and Dr. T. Colin Campbell. Click above for a preview.

Everyone reading this blog has probably heard about the fact that President Clinton walked away from all meat and dairy about a year ago. He announced on CNN with Wolf Blitzer that he didn’t adopt his new plant-based diet to lose weight, but that he’d lost 24 pounds without even trying.

He said he adopted the healthier diet so that his heart could heal itself — after reading the works of Campbell (China Study), Esselstyn (Prevent & Reverse Heart Disease and Dr. Dean Ornish, who had been one of his consulting physicians since 1993. From the article:

His dietary saga began in 1993, when first lady Hillary Clinton decided to inaugurate a new, healthier diet for her husband. In a meeting, she asked Dr. Dean Ornish to work with the White House chefs, who were accustomed to high fat, French cuisine.

Even with the revamped White House menu, Clinton battled his weight throughout his two terms as president. At his annual physical in 1999, the White House physician noted the president had put on 18 pounds since a checkup two years earlier. The prescription: refocus on exercise and a low-calorie diet.

During the special on Sunday, Dr. Sanjay Gupta will be speaking with a number of medical doctors including Dr. Esselstyn, Dr. Ornish, Dr. Terry Mason (Chief Medical Officer of Cook County Hospitals in Chicago), Dr. Arthur Agatston (cardiologist and author of The South Beach Diet) and others. The article further reports:

Ornish recalls meeting with Clinton a few days after his angioplasty. “I shared with him that because of his genetics, moderate changes in diet and lifestyle weren’t enough to keep his disease from progressing. However, our research showed that more intensive changes  actually reverse progression of heart disease in most people.”

Everyone reading this article might be asking the same question that Dr. Gupta asks: “If presidents of the United States receive the best health care in the world, how it is that former President Bill Clinton needed emergency bypass surgery just a few years out of office?” The article further reports that “In a candid and revealing interview, the former president discusses the warning signs he feels he missed, and the major life change he made that he credits with his present good health.”

Bottom Line. This special is a big deal! It’s been almost a year since President Clinton reversed his heart disease by employing a regimen that is still not taught in medical schools and is still not shared by our government officials with the American public. To have a full hour devoted to this powerful topic is HUGE. He has already lent an enormous amount of credibility to our message in this blog and in our book — and hopefully this special will spark an interest in other news organizations to probe even deeper.

It will be interesting to see if Dr. Gupta further reports that the very same diet that reverses heart disease is the same diet that will reverse type 2 diabetes, prevent virtually all cancers, stroke, osteoporosis and erectile dysfunction — just to name a few. Is he going to tell us that our “cost of health care dilemma” that we now have in the USA can quickly be a thing of the past if everyone listens to President Clinton. This diet is not just for sick people — it’s the natural diet for our species. And it’s the diet that will shave two trillion dollars off our health care bill in the USA.

Unfortunately, along with that two trillion dollars are over 20 million jobs that would be lost — if everyone got healthy. Therefore, our Congress is not likely to support a rapid rollout of the Clinton Diet — even though it could save the lives of millions of Americans.

Earlier this year, I blogged a “letter to President Clinton” thanking him for sharing his powerful story and asking him to consider endorsing our book, thereby helping to continue spreading the word. For your convenience, I have provided links to two articles about Sunday’s special (beneath my signature).

From omnivore to vegan: The dietary education of Bill Clinton – CNN.com.

A former strategic management consultant and senior corporate executive with Ralph Lauren in New York, J. Morris Hicks has always focused on the "big picture" when analyzing any issue. In 2002, after becoming curious about our "optimal diet," he began a study of what we eat from a global perspective ---- discovering many startling issues and opportunities along the way. In addition to an MBA and a BS in Industrial Engineering, he holds a certificate in plant-based nutrition from the T. Colin Campbell Center for Nutrition Studies, where he has also been a member of the board of directors since 2012. Having concluded that our food choices hold the key to the sustainability of our civilization, he has made this his #1 priority---exploring all avenues for influencing humans everywhere to move back to the natural plant-based diet for our species.
View all posts by J. Morris Hicks →
This entry was posted in Activism & Leadership, Bill Clinton, Heart Disease. Bookmark the permalink.