The fourth edition of our Sound Bite Series…

For billions of years, the quantity of water on this planet has remained constant; but the human species has dramatically changed the way that this finite resource is being used.

The UN report, Livestock’s Long Shadow, came out in late 2006 and reported how the livestock industry is seriously damaging our environment in four separate categories: Land and Trees, Water, Climate Change and Biodiversity.

All four were covered in Chapter 4 of our book; for your convenience, a few sound bites are presented here for the second one: Water Shortage and Pollution.

Bite #1. The water required to produce just ten pounds of steak equals the water consumption of the average household for a full year.

The production of beef; one of the most wasteful uses of water in the history of the world.

Bite #2. This incredible waste of our most precious natural resource is taking place while Water.org reports that nearly one billion people lack access to safe water.

More people in the world own cell phones than have access to a toilet. And as cities and slums grow at increasing rates, the situation worsens. Every day, lack of access to clean water and sanitation kills thousands and leaves others with a poor quality of life.

Animal waste polluting our water supply; a huge problem that gets worse every day

Bite #3. Agricultural runoff is the single largest source of water pollution in the nation’s rivers and streams according to the E.P.A. (reported in a September 2009 article in the New York Times)

The solid waste from factory farms in the USA alone is staggering — 87,000 pounds per second; equaling 1.37 billion tons per year. And what happens to all that waste? The short answer is that it ends up in our water supply. 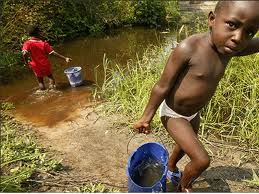 As more people adopt the wasteful Western diet every day, the problems of water shortage and pollution continue to get worse.

All of the above is based on well-referenced information that appears in Chapter 4 of our book. While the U.N. Report was compelling in its findings, it offered precious little in terms of a recommended solution.

That’s because, it is very likely that a very large percentage, if not ALL, of the scientists working on the study still believe that we humans “need” to eat animal protein to be healthy. Until these great minds understand the complete truth about nutrition, they are not likely to recommend the obvious solution — a return to the natural diet for our species.

By promoting your own health, you will be doing your part to conserve our water.

A former strategic management consultant and senior corporate executive with Ralph Lauren in New York, J. Morris Hicks has always focused on the "big picture" when analyzing any issue. In 2002, after becoming curious about our "optimal diet," he began a study of what we eat from a global perspective ---- discovering many startling issues and opportunities along the way. In addition to an MBA and a BS in Industrial Engineering, he holds a certificate in plant-based nutrition from the T. Colin Campbell Center for Nutrition Studies, where he has also been a member of the board of directors since 2012. Having concluded that our food choices hold the key to the sustainability of our civilization, he has made this his #1 priority---exploring all avenues for influencing humans everywhere to move back to the natural plant-based diet for our species.
View all posts by J. Morris Hicks →
This entry was posted in Environment, Sound Bites, Water Pollution & Usage. Bookmark the permalink.