One of Oprah’s final shows (in May of 2011) was a full hour with Ralph Lauren at his Double RL Ranch near Telluride, Colorado. After recording the show while traveling last week, I watched it yesterday morning. From the very beginning, I got a feeling of deja vu as Ralph opened his home to the public for the first time ever. 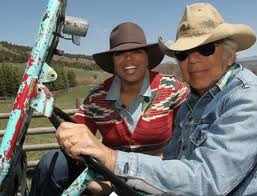 The show began with Ralph driving Oprah around his ranch in his favorite antique Jeep.

Deja vu?  Because it was I who got the first private tour of Ralph’s exclusive estate in Bedford, New York over twenty years ago. After spending several years and many millions of dollars renovating his Bedford “castle” — to a near “heaven on Earth” as only he can do — he invited thirty of his employees for lunch with him and wife Ricky on his terrace; one fine autumn day in early October.

It was the first time he had opened his home to anyone other than family. More on that first tour later; but first, what about that “big picture” similarity that he and I share? 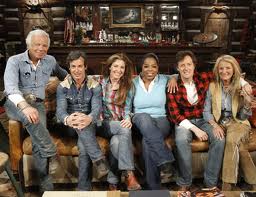 Another rarity of this telecast was that Ralph’s entire family was included. After working for Polo for seven years, I met Ricky a few times but never saw one of his three children a single time.

In the interview with Oprah, Ralph talked about the fact that he wasn’t about fashion — rather that he was all about living — a big picture if you will. He looks at the big picture of living and creates an atmosphere of beauty, grace, warmth and comfort.

While he focuses on the visual big picture and addresses every single detail, it reminds me of what I am trying to do with the “big picture” about all of the other non-visual aspects of how we live. He focuses on beauty and comfort — I focus on health, efficiency, respect for the other creatures and sustainability.

My study of “how we live” began with a search for the optimal health-promoting diet for humans in 2002. About six months into my study of health issues, I began to realize that the way we eat was causing enormous damage to our environment, was extremely wasteful, grossly unsustainable and was causing the needless suffering of sixty billion animals a year for our dinner tables. 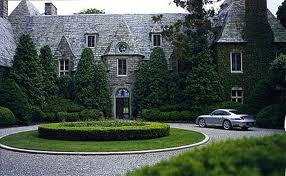 My first visit to Bedford in 1990 began when I pulled my company Jaguar up to this elegant entry.

Now, as my first book is being printed, I have begun an examination of the other wasteful and harmful aspects of the way we live in the western world — big vehicles, inefficient housing, and suburban sprawl. It’s all beginning to feel like a mad attempt by the human race to take over, “develop,” and spoil every square inch of this marvelous planet.

As Ralph Lauren’s lifestyle vision goes far beyond the design of clothes; my own vision goes far beyond understanding what we should be eating. I am no more a nutritionist than Ralph Lauren is just a fashion designer. We are both “big picture” guys who are passionate about what we do. We help our audience understand the “big picture” first; and with that understanding, all the other details simply fall into place. 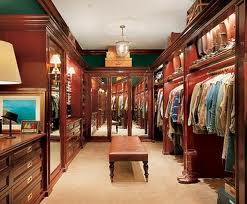 My very own private tour with Ralph included a tour of his and Rick’s country estate closet, complete with all the appropriate attire for entertaining in style.

Just as my study has led me beyond health into the housing and transportation aspects of our lives, Ralph’s vision led him into everything from watches and home furnishings to restaurants, resorts and automobile interiors. When you have a “big picture” view of things, there really is no limit — which is why I will never run out of things to write about in this blog.

Like Ralph said on the show, while in the middle of his first runway fashion show over 45 years ago, he said he was scared to death — wondering what he was going to do for the next season. But, he was passionate about what he did and never ran out of ideas — Likewise, I am confident that my passion for improving the harmful, wasteful and unsustainable life of the twenty-first century modern human being will never end. 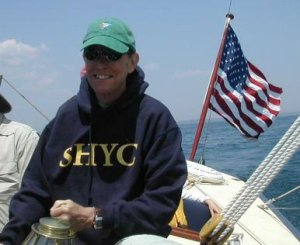 This “big picture” guy enjoys making a small carbon footprint — whether living, driving, eating or recreating — like in the above picture off of Newport, R.I. in one of the America’s Cup vintage yachts.

Back to my tour…watching Oprah today; I realized that, like her, I was the very first “non-family” guest to see Ralph’s Bedford mansion. Why? Simply because I drove directly from the airport and awkwardly arrived an hour before everyone else.

Trying to be discrete, I quietly asked a painter (who was touching up the front door) which entrance I should plan on using an hour later. He immediately yelled out for “MR LAUREN!” and soon my private — and very unexpected — private tour began.

Not only was I awkwardly early, but (in my navy blue suit) was not dressed appropriately for the occasion. But Ralph didn’t seem to mind — and was a most gracious host. Today, Oprah used the word “holy” to describe the view from the ranch; I remember using the word “ethereal” to describe my Bedford experience to my friends and family. For more on RL…a previous post: Ralph Lauren (my former boss) — Health Enthusiast

One more thing; I am frequently asked how a guy goes from being a senior executive with Ralph Lauren to “saving the planet” with healthy eating. If you’ve got a few minutes, take a look at From Polo to Plant Food…my story.

A former strategic management consultant and senior corporate executive with Ralph Lauren in New York, J. Morris Hicks has always focused on the "big picture" when analyzing any issue. In 2002, after becoming curious about our "optimal diet," he began a study of what we eat from a global perspective ---- discovering many startling issues and opportunities along the way. In addition to an MBA and a BS in Industrial Engineering, he holds a certificate in plant-based nutrition from the T. Colin Campbell Center for Nutrition Studies, where he has also been a member of the board of directors since 2012. Having concluded that our food choices hold the key to the sustainability of our civilization, he has made this his #1 priority---exploring all avenues for influencing humans everywhere to move back to the natural plant-based diet for our species.
View all posts by J. Morris Hicks →
This entry was posted in Big Picture, Celebrities. Bookmark the permalink.