Why do I say too little, too late? Because, even if ALL of the committee’s recommendations were included in the official guidelines, it would take decades to make much of a difference in what most Americans are actually eating. And what about the rest of the world? 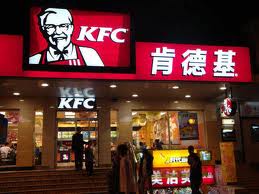 Fast Food in China still on a meteoric rise

In the greater scheme of things, our share of the total global meat consumption has been dropping for some time now. China now consumes twice as much meat as we do.

In my 9-25-14 blog (below), I pointed out that our modest meat reductions in the USA are being wiped out by massive increases in the developing world. For example:

For every American or European who is beginning to eat less meat, there are about 100 people in the developing world headed in the other direction.

Meanwhile, people like Mark Bittman have to dig through 571 pages in order to summarize it such that the average reader of the New York Times can understand it. I had to chuckle at the first line of this summary paragraph:

Industry representatives hate the report — a good indicator of its value — and will fight to keep its recommendations from becoming policy. (Saying “eat less meat” is way different from saying “eat more lean meat.”) We should carefully monitor the current public comment period, which will be followed by a review by the Health and Agriculture Departments later this year, before the official Dietary Guidelines for Americans will be published. The smart environmental qualifications, and much else, will be fought furiously. But whatever is adopted will become official policy and will strongly affect school lunches and other federally funded meal-serving programs. Overall, these recommendations deserve our support (you can register your comments here) and our awareness that they need to go further.

While the recommendations noted that the plant-based foods have less environmental impact than animal-based foods, they came up way short in explaining exactly what that means—to the health of our ecosystem and its impact on the future of our civilization and the survival of the human species.

Finally, the pork producers weigh in with their take on the new recommended guidelines.

“It appears the advisory committee was more interested in addressing what’s trendy among foodies than providing science-based advice for the average American’s diet,” Hill said. “Have we really come to the point where alcohol is okay and meat isn’t”?

The most important three ingredients for success: Leadership, Leadership & Leadership

The Bottom Line. While it’s great to see a little good news on the official dietary guideline front, it’s distressing to consider just how far away we are from actually beginning to REDUCE our global consumption of meat. We’ve already passed a number of environmental tipping points as explained in the last blog referenced below.

If we’re to have a chance of saving our civilization, we’ll need powerful global leadership to develop and execute an international campaign urging people to start making radical changes in their diets immediately.