Some get filthy rich while hastening the demise of civilization.

For years the debate has been about whether or not climate change exists and whether not it is being caused by human activity. But now, we see the debate shifting from how to lessen, stop or reverse climate change (mitigation) to how can we save ourselves while making a lot of money off climate change?

A reviewer on Amazon writes: “Therefore our reaction is going to be shaped bottom-up by people who are thinking of personal profit rather than the global good.”

An article by Vox writer Brad Plumer caught my attention yesterday, Meet the companies that are trying to profit from global warming. In the article (see link below), Mr. Plumer interviews McKenzie Funk, the author of Windfall: The Booming Business of Global Warming. The article opens by citing a list of money making examples put forth by Mr. Funk in his book. Among them:

Here’s one passage that I found interesting about making money off the land and water crises. The book’s author, Mr. Funk, states:

Yeah, you see big investment banks, big hedge funds — everyone is in on the land rush. Big American banks like Goldman Sachs, Gulf state governments, Chinese state-owned corporations. They’re buying up land in Brazil, Cambodia, Laos, eastern Russia, Ukraine, in addition to the places in Africa that everyone talks about.

And it’s absolutely connected to water. The thing about water is that you can’t move it around in ships very easily. The idea that you’re going to put freshwater from Alaska into a tanker and take it to India or California — the numbers just don’t work. But you can ship food. So essentially buying up farmland abroad is a way for companies and countries to trade virtual water by moving food around the globe.

While reading, I was struck by the fact that none of these ideas do a damn thing to protect the environment. Just the opposite; they accelerate the process of global depletion while enabling a few wealthy investors to get more wealthy. Instead of sleepwalking off a cliff; it’s now as if we’re all racing toward that cliff, where all will eventually perish.

From beginning to end, their thriving civilization lasted about 1,000 years, then collapsed after finite resources were depleted.

Like the humans who settled lush and tropical Easter Island and built a flourishing economy that supported ten or fifteen thousand people. They made a very nice life for themselves for about a thousand years, but were using up finite resources at a much faster rate than nature could replace them.

By the time the Dutch found them on Easter Sunday in 1722, their civilization had collapsed and the few remaining Rapa Nui had resorted to cannibalism to survive.

The same thing is happening to us now. In the never ending race to maximize the consumption of more STUFF, we’re using up our land, our water, our trees, our minerals—and in the process, we’ve caused our climate to change and the rate of species extinction to surge to over 1,000 times its normal rate.

Sadly, this powerful book of truth has not been read by nearly enough people.

And it gets worse every day. As Stephen Emmott points out so clearly in TEN BILLION, one of our biggest problems is how we’re going to feed ourselves in the future. As our population surges and the average person eats more food, we’ll need to produce more food in the next forty years than ALL food that has been produced for the last 10,000 years—combined.

And the only way we can produce that much food is to totally destroy the remaining rainforest and/or to grow food on land in Greenland or Siberia that was once frozen. Although both of those will push us ever more rapidly toward that cliff, our insatiable greed has already started moving us in that direction.

So who or what do we blame for this mess? And how do we fix it? Over the past year, I have written and spoken frequently about the four major problems we must address:

The bad news is that the first three problems will require decades, if not centuries to bring under control. Eventually, we must deal with them, but I have concluded that the ONLY way that will happen is by taking URGENT action NOW with #4—our food choices; thereby buying us the time we need to address all four of these problems. 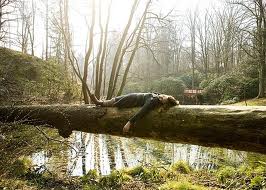 It all boils down to harmony—we must quickly learn to live in harmony with nature.

The Bottom Line. With the conversation already shifting from “mitigation” to “adaptation” and personal gains from climate change, it will be even more difficult to stop that money-making juggernaut.

Our ONLY chance is to change what we eat. The good news is that, compared to the first three, that task can be done relatively quickly, easily and inexpensively. But we need powerful leadership who will stand up to the special interests and begin telling people everywhere the complete truth about our food choices—for our health, for our ecosystem and for the longterm survival of our species.

Grassroots change? While grassroots change is great, it’s simply a case of too little, too late this time. We urgently need a MASSIVE, privately-funded, global awareness campaign with a definite plan for repeatedly reaching the most affluent two billion people in the world—those who are eating most of the animal-based foods. That campaign may cost 100 billion dollars or more, but so what?

What good is a pile of money if there is no food, no water and no civilization? Is making money really more important than the livelihood of your grandchildren? — J. Morris Hicks

To order more of my favorite books—visit our online BookStore now For help in your own quest to take charge of your health, visit our 4Leaf page and also enjoy some great recipes from Lisa’s 4Leaf Kitchen.