J. Morris Hicks speaking to the sixth graders in New London, CT in April of 2013.

In April of 2013, I came up with the Food Math 101 concept while preparing to speak to a 6th grade class in New London, CT. It was part of an effort to present powerful, irrefutable evidence supporting a plant-based diet—in addition to our own health benefits that come with it.

Recently, I have been speaking about the fact that we’re the ONLY species out of millions who can’t figure out what we should be eating. To me, it’s a blinding flash of the obvious—even without considering the health benefits.

In fact, even if the typical western (meat-based) diet were the absolute healthiest way for humans to eat, it wouldn’t really matter—because it is grossly unsustainable for much longer. Even 3rd graders seem to have no trouble understanding most of the information in Food Math 101. It is imperative that we eventually stop eating animals altogether for our longterm survival as a species. Right now, the enormous health benefits of doing it sooner rather than later—is just a HUGE bonus.

To me, it all boils down to the global depletion of three finite resources needed to produce our food. Land, water and energy; with the first two being the most precious and most crucial to our survival. Most of the data in this blog can be found in the “Hicks Six-Pack” provided below.

In my research of many books and articles by the likes of Dr. Pimentel, Emmott, Oppenlander, Lester Brown and others, I choose not to use specific numbers like 12,000 gallons of water for a pound of beef—because every researcher comes up with slightly different numbers and it gets confusing for the reader.

Therefore, I prefer to use conservative ranges that are not only powerful, but also easy to remember AND easier to defend. You will see those kinds of ranges below.

Most of us are focused on relatively trivial news stories but pay zero attention to the far more important issue: the almost certain collapse of our civilization before the end of the century. We hear NOTHING about the stories in RED on this list—things that have happened in just 19 days.

Food Math 101. The numbers behind our typical western diet of meat, dairy, eggs and/or fish three meals a day—are simply not adding up. Here is a list of points that I would make to any group of all ages—beginning at age 12.

2. How much arable farmland do we have? Roughly 8 billion acres which equals about six billion football fields?

3. How many football fields does it take to feed one person the typical western diet? TWO.

4. How many people eating a plant-based diet could be fed with that same amount of land? FOURTEEN. 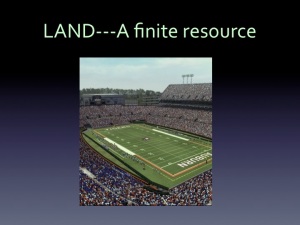 5. So with a total of six billion football fields, we could theoretically feed 42 billion people a plant-based diet—or only 3 billion people the typical western diet. In the latter case, the remaining 4 billion people would all starve to death.

7. Only about two billion humans (out of 7.1 B total) are currently eating the typical western diet, but many more are moving in that direction everyday. According to my own extrapolation of the FAO numbers—for every person in the USA or Europe that is moving toward a plant-based diet, there are ten people in the developing world who are beginning to eat more meat, dairy, eggs and/or fish.

8. It gets worse. Every single day, the world’s population surges by another 230,000 people and every single year, we lose an area the size of South Carolina to erosion. At the same time, Dr. Emmott predicts that the world must produce more food in the next 40 years than the grand total of all food that has been produced during the past 10,000 years.

9. Even worse, in order to make room for more cattle, since 1970, we’ve destroyed over 20 million acres of our precious rainforest every year. That’s a total of approximately one billion acres of rainforest (the lungs of the Earth)—gone forever. How much land is that? An area about the size of ALL farmland in the entire United States. (Census of Agriculture, 2007)

10. What about water? Over 70% of the world’s finite supply of fresh water is used for agriculture, with over 70% of that number dedicated to growing animal-based foods for those two billion wealthiest people.

Over half the fresh water being used throughout the world could be saved by a simple shift to a plant-based diet for all humans.

11. Today, over one billion people are thirsty and that number is growing everyday. A huge part of the problem is our dependence on underground aquifers that are being pumped dry all over the world—to provide water for livestock to drink and to grow their food.

As Lester Brown points out in “Full Planet, Empty Plates,” we’re currently draining aquifers in 18 countries, where over half the world’s population resides. After taking billions of years to fully charge those aquifers, we’re wiping them out in less than 200 years. When they are gone—they are gone forever and crops can no longer be grown on the land above them.

The Bottom Line. As the world runs out of food and water, our human civilization will eventually collapse. Emmott and Brown agree that, unless radical changes are made, that collapse will occur well before the end of this century. The good news is that there is a powerful solution, right under our noses. It’s what we put in our mouths three meals a day. It’s the FOOD!

The ONLY viable pathway to the longterm sustainability of our civilization is the widespread adoption of a whole food, plant-based diet. — J. Morris Hicks

When one tugs at a single thing in nature, he finds it attached to the rest of the world. — John Muir

Want to become an activist and help save our civilization? Here’s the Activism Kit that I gave to a group of Holy Cross college students on March 19, 2014. Notice #6? I am serious, once you know enough about the horrible impacts of our typical western way or eating, how could you possibly NOT become an activist? All of the suggested books and videos shown here are also in my Six-Pack from Hicks just beneath this slide. 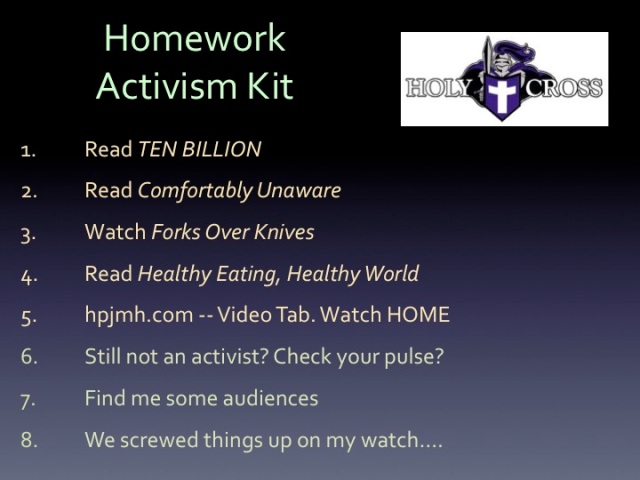 A few earlier links for your convenience:

5 Responses to Food Math 101—saving our civilization made simple