On July 2, 2012, the New York Times published an article about a new sexual disorder that is about to become an officially diagnosed disease. The article was entitled More Women Look Over the Counter for a Libido Fix. From the article:

Female sexual dysfunction remains a controversial topic, even as it becomes an official diagnosis (to be called female sexual interest/arousal disorder) in the DSM-V, the new edition of the psychiatric diagnostic manual, due in 2013.

An often cited statistic, from a report in The Journal of the American Medical Association in 1999, is that 43 percent of women ages 18 to 59 experience some form of sexual dysfunction, including lack of desire, arousal or orgasm; or pain during intercourse. 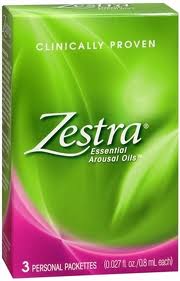 Zestra Essential Arousal Oil, one of countless sexual enhancement products for women that are already on the market.

About that 43% statistic; it may be often cited, but this is the first time that I have heard about it. And like all other disorders, diseases and maladies—they may not be directly caused by what we eat—but looking at one’s diet is a pretty good place to start.

It just makes sense. Our bodies are comprised of 100 trillion cells that must be nourished by blood flowing through 100,000 miles of arteries, veins and blood vessels. There’s a lot of complicated stuff going on in our bodies all the time and it just makes sense that for all that equipment to operate as planned, the most basic of all necessities—is that we start out with the right fuel for our species. (See Preponderance of evidence for “mostly plants”)

In researching for our book in 2009, I discovered that the human body replaces all 100 trillion cells every ten years. That works out to an average of ten trillion new cells every year. So why is our food so important for those future cells? Because it is the ONLY raw material our bodies use to build new cells (with the exception of air and water).

So how many future new cells are dependent on each bite of food we put in our mouths? In order to figure that out, I counted my bites for a few days back in 2009. And the incredible answer is this:

The health of 100 million future cells in your body is riding on every single bite that you put in your mouth.

Almost everyone now admits that eating more fruits and veggies is good for you—yet the average American still gets far less than ten percent of their calories from whole plants. The other 90% are derived from a toxic combination of meat, dairy, fish, eggs and highly processed carbohydrates.

So what would happen to E.D., F.S.D., heart disease, cancer, type 2 diabetes and many other maladies if everyone began deriving the vast majority of their calories from whole plants? What if everyone was eating an optimal diet and choosing “vibrant health” for their 100 trillion cells? We know that there would be far less disease, we just don’t know exactly how much. But since everything in our body involves “cells at work,” it just makes sense to do our part to help those cells perform at their most efficient level.

Back to the article; as you can imagine, there is great deal of controversy on this topic and it’ not even yet an officially diagnosed disease. There are already a plethora of women’s sexual aid products on the market (See Zestra above) and no one knows if any of them really work. And what about the side effects—both physical and mental? One expert weighs in:

“What I don’t like is that we’re exploiting women’s sexual desire by selling women products that may not be the best thing for our bodies and may not work,” said Tammy Nelson, a sex and relationship therapist in Connecticut and the author of “Getting the Sex You Want” (Quiver, 2008). Click here to order on Amazon.

The bottom line. Get the diet right first—and it may very well take care of a great many of your health problems, maybe all of them. Of course, along with that superior diet, it’s also best if you incorporate the other “three leaves of health” into your life: regular exercise, adequate rest (7 or 8 hours a night for most) and a purpose in your life, about which you are passionate.

The average American gets a paltry five percent of their calories from the fuel that nature intended for us to eat. That’s why we need 20 million people in our health care industry to take care of the problems that ensue. It just makes sense!

A former strategic management consultant and senior corporate executive with Ralph Lauren in New York, J. Morris Hicks has always focused on the "big picture" when analyzing any issue. In 2002, after becoming curious about our "optimal diet," he began a study of what we eat from a global perspective ---- discovering many startling issues and opportunities along the way. In addition to an MBA and a BS in Industrial Engineering, he holds a certificate in plant-based nutrition from the T. Colin Campbell Center for Nutrition Studies, where he has also been a member of the board of directors since 2012. Having concluded that our food choices hold the key to the sustainability of our civilization, he has made this his #1 priority---exploring all avenues for influencing humans everywhere to move back to the natural plant-based diet for our species.
View all posts by J. Morris Hicks →
This entry was posted in Erectile Dysfunction, Vibrant health. Bookmark the permalink.