A case for fitness—to ward off “lengthening morbidity”

In God We Trust—All Others Must Bring Data

There has been a sign in my office with that phrase for the past thirty years. Having been trained as an industrial engineer, I have always had an appreciation for numbers. If something is worth doing, it’s worth measuring it—and reporting the numbers.

One of the many forms of aerobic exercise

A recent article in the New York Times health section caught my attention last week. It was all about how just being fit at middle age bodes well for a better life in the golden years. From the article (See link below):

Americans are living longer, with our average life expectancy now surpassing 78 years, up from less than 74 years in 1980. But we are not necessarily living better. The incidence of a variety of chronic diseases, like diabetes and heart disease, has also been growing dramatically, particularly among people who are not yet elderly.

The convergence of those two developments has led to what some researchers have identified as a “lengthening of morbidity.” That means we are spending more years living with chronic disease and ill health — not the outcome that most of us would hope for from a prolonged life span.

The data from a new study published last week in Archives of Internal Medicine was interesting. They pulled the records of almost 19,000 middle-aged men and women who’d visited the Cooper Institute Clinic in Dallas for a check-up beginning in 1970.

For the study, researchers at the University of Texas Southwestern Medical Center and the Cooper Institute in Dallas gathered medical records for 18,670 middle-aged men and women who’d visited the Cooper Clinic (the medical arm of the Cooper Institute) for a checkup beginning in 1970 (average age was 49).

Then they compared the results of that checkup (using their aerobic test scores to establish five categories of fitness) with their Medicare records from 1990 to 1999, a decade when most of the participants were in their 70s or 80s. And guess what? The people in the “least fit” category were the most likely to have developed any of eight serious or chronic conditions early in the aging process.

On the other hand, people who scored in the “most fit” category in their middle age also developed many of the same chronic conditions but developed them later in life. As they summarized in the article:

Typically, the most aerobically fit people lived with chronic illnesses in the final five years of their lives, instead of the final 10, 15 or even 20 years. 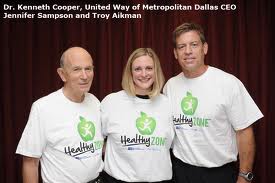 Dr. Kenneth Cooper on the left and Troy Aikman on the right. Dr. Cooper is known as the “father or aerobics.”

I know what you’re thinking. What if they had data on 5,000 of those 19,000 people who’d adopted a whole foods, plant-based diet at age 59? I wonder what their frequency of developing any of those eight chronic diseases would have been. Diseases such as heart disease, diabetes, Alzheimer’s, and colon or lung cancer.

Given what we know about the combined disease reversal records of Esselstyn, Fuhrman, Barnard, McDougall and Ornish—I am betting that those aerobically fit “healthy eaters” would have knocked the ball out of the park when it comes to avoiding 80% of those diseases and completely eliminating most of the “morbidity” associated with old age. Someday there will be such a study. But in the meantime…

It only stands to reason, if heart disease and diabetes can be reversed with a whole foods, plant-based diet, then beginning that same healthy eating regimen earlier in life would certainly be expected to prevent those diseases (and some cancers) in the first place. This is a concise summary of the primary finding of the study:

Being or becoming fit in middle age, the study found, even if you haven’t previously bothered with exercise, appears to reshape the landscape of aging.

So why not do both? Get fit, eat right, and while you’re at it—work on eliminating depression, following your passion and being as happy you can be. That kind of winning combination just makes sense. Enjoy vibrant health now and a relative absence of morbidity during your golden years.

In addition to the source article, I have also provided links to a few earlier blogs that focus on the “big picture” of vibrant health—with emphasis on exercise, sleep & mental attitude in addition to a near-optimal diet.

A former strategic management consultant and senior corporate executive with Ralph Lauren in New York, J. Morris Hicks has always focused on the "big picture" when analyzing any issue. In 2002, after becoming curious about our "optimal diet," he began a study of what we eat from a global perspective ---- discovering many startling issues and opportunities along the way. In addition to an MBA and a BS in Industrial Engineering, he holds a certificate in plant-based nutrition from the T. Colin Campbell Center for Nutrition Studies, where he has also been a member of the board of directors since 2012. Having concluded that our food choices hold the key to the sustainability of our civilization, he has made this his #1 priority---exploring all avenues for influencing humans everywhere to move back to the natural plant-based diet for our species.
View all posts by J. Morris Hicks →
This entry was posted in Athletic performance, Vibrant health and tagged exercise and health, fitness and disease. Bookmark the permalink.