Mark Twain: Telling it like it is on America’s birthday

His words prompting me to challenge Americans to make things right.

Although he has been dead for over 100 years, Mark Twain will be with us forever. And thank goodness for that. For it was he who never feared of consequences of speaking the truth as he saw it—and it is well-documented that he did so often.

Mark Twain — a famous American widely known for “telling it like it is.”

Although often criticized regarding his forthright comments about us human beings, I think he hit the nail on the head. Although we think that we’re smarter than all of the other millions of species of fellow Earthlings, we must remember that we’re the only species in the history of the planet who has not lived in harmony with the nature.

In fact, in just the past fifty years, we have inflicted more damage on the fragile harmony of nature than all previous generations of humans combined for the last 200,000 years.

Many of us go merrily along recklessly plundering and running roughshod across the planet, believing all the while that we’re right—and that God Almighty is on our side. Here’s what Mark Twain had to say about that:

The animals have no religion. And we are told that they are going to be left out in the Hereafter. I wonder why? It seems questionable taste……Of all the animals, man is the only one that is cruel. He is the only one that inflicts pain for the pleasure of doing it. It is just like man’s vanity and impertinence to call an animal dumb because it is dumb to his dull perceptions.

The fact that man knows right from wrong proves his intellectual superiority to the other creatures. The fact that he can do wrong proves his moral inferiority to any creature that cannot. I am not interested to know whether it is profitable to the human race or not. The pain it inflicts upon unconsenting animals is the basis and sufficient justification of my enmity towards it without looking further. In studying the traits and dispositions of the so-called lower animals, and contrasting them with man’s, I find the result humiliating to me.” Mark Twain (Samuel Clemens) Author (1835 – 1910)

On a brighter note. I want to tell you about my special day in New York City on the 4th of July. It was my distinct pleasure to join eight highly successful women for a special luncheon at a fine restaurant in Battery Park overlooking the Statue of Liberty. Being the only man in the group made the event even more memorable. Joining us in the same restaurant was a table of 25 American veterans, including many from World War II. 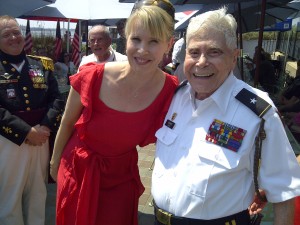 After singing, Karen poses for a photo with a veteran of the Normandy invasion.

It was my good fortune to snap this photo of one of those vets, alongside my new friend Karen, who was with our group. Following our luncheon, Karen stood up and announced that she had a gift for us. An Australian now living in New York, she then proceeded to sing our nation’s Star Spangled Banner. Of course, we all rose and did our best to sing along with her.

She then went out on the terrace  where the 25 veterans were seated around a long table. Once again, she sang the Star Spangled Banner for them, hit every note perfectly and thanked all of those brave men for their service—to our nation and to the world. They were ecstatic—and will never forget the experience. (more about Karen later)

Back to the wisdom of Mark Twain. Sometimes, I refer to this quote during my public speaking engagements. Again, telling it like it is, Twain makes it clear that up until now, humankind has not really served any useful purpose. On the other hand, we have collectively done our best to destroy ourselves, our planet, and all of our fellow Earthlings with it.

Maybe now is the time for us to come together and correct the harmful ways of our past—by bringing ourselves back into harmony with the world in which we live.

Twain had arrived at the not unreasonable but never popular conclusion that mankind “was not made for any useful purpose, for the reason that he hasn’t served any; that he was most likely not even made intentionally; and that his working his way up out of the oyster bed to his present position was probably a matter of surprise and regret to the creator.”

And from Einstein. “Our task must be to free ourselves…by widening our circle of compassion to embrace all living creatures and the whole of nature and its beauty” Albert Einstein (1879 – 1955) Physicist, Author, Nobel Laureate in Physics 1921 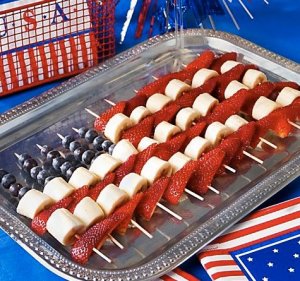 4Leaf eating the patriotic way—on the 4th of July

The Harmony Challenge for my fellow Americans. The single most powerful move that we humans can make to restore harmony with nature is to move aggressively back to the natural diet for our species—one consisting primarily of whole, plant-based foods. You see that diet-style requires 90% less water, 90% less energy and 90% less land (per calorie) than our toxic western diet of meat, dairy and highly processed foods three meals a day.

That single move will do wonders for our diminishing water supply, biodiversity crisis, global warming, and unsustainable soil erosion—just to name a few. And as a bonus, we’ll all be much healthier, we can eliminate world hunger forever and we can end the needless suffering of 60 billion animals per year in our factory farms. And after 12 weeks, you’ll enjoy this way of eating more than you can imagine.

Saving the best for last. Before signing off, I wish to share one bit of information about Karen (mentioned earlier)—the fact that you’ve no doubt heard her voice thousands of times.

Her most famous word is “re-calculating” and, if you’ve ever taken a wrong turn, you’ve probably heard it—perhaps from Karen, the GPS Girl as she calls herself. She is now the “voice of choice” on over 100 million electronic devices around the world–on five brands of GPS and now the voice of “Siri” on the iPhone.

If you hire Karen to speak at your next event, tell her that J. Morris Hicks sent you.

One more thing. I recently posted a blog about another Australian, Mr. Philip Wollen, a prominent business executive from down under. I later visited his website and found a page I want to share with you.

When we talk about the needless torture and consumption of two billion animals per week for our dinner tables, it’s hard to fully appreciate that number. On Mr. Wollen’s website, he has provided us with a visual. It’s called the Killing Clock and starts the moment you open that page. Then it continuously computes the number of animals killed in 14 different categories since you began watching.

Watch it for a few minutes, then do some soul-searching. Then follow your instincts; I am confident that you will do the right thing. Click here for the Killing Clock Then, if you’re interested, click here to watch Earthlings.

For help in your own quest to take charge of your health, you might find some useful information at our 4Leaf page or some great recipes at Lisa’s 4Leaf Kitchen. Got a question? Let me hear from you at jmorrishicks@me.com. Or give me a call on my cell at 917-399-9700.

A former strategic management consultant and senior corporate executive with Ralph Lauren in New York, J. Morris Hicks has always focused on the "big picture" when analyzing any issue. In 2002, after becoming curious about our "optimal diet," he began a study of what we eat from a global perspective ---- discovering many startling issues and opportunities along the way. In addition to an MBA and a BS in Industrial Engineering, he holds a certificate in plant-based nutrition from the T. Colin Campbell Center for Nutrition Studies, where he has also been a member of the board of directors since 2012. Having concluded that our food choices hold the key to the sustainability of our civilization, he has made this his #1 priority---exploring all avenues for influencing humans everywhere to move back to the natural plant-based diet for our species.
View all posts by J. Morris Hicks →
This entry was posted in Activism & Leadership, Suffering of Animals. Bookmark the permalink.

1 Response to Mark Twain: Telling it like it is on America’s birthday