So what’s wrong with that? Nothing, in my opinion.

As I’m sure you’ve heard, Mayor Michael Bloomberg is already famous for banning smoking in bars and trans-fats from restaurant food. He’s also created more biking lanes in his administration than all others combined and has forced the posting of calorie counts in fast food restaurants.

On CBS This Morning with Charlie Rose, the mayor chuckled about his “nanny” image, calling it just the story of the week that will soon fade away.

In a city that leads the nation in type 2 diabetes, he’s simply doing what he can to force some positive change. It’s still a free country—you can still feed your child 32 ounces of soda at one sitting, you just can’t buy it in one bottle or cup. He’s simply making it a little more difficult to consume empty calories—devoid of all nutrition. Mark Bittman weighs in (New York Times, 6-5-12):

If you believe government has no role in helping people — including encouraging us to act in our own best interests by doing things like not smoking, wearing seat belts and getting exercise — you’re probably no fan of New York’s mayor, Michael R. Bloomberg.

The arguments against this ban mostly come from the “right.” (There actually is no right and left here, only right and wrong.) We’re told, as we almost always are when a progressive public health measure is passed, that this is “nanny-statism.” (The American Beverage Association also argues that the move is counterproductive, but the cigarette companies used to market their product as healthful, so as long as you remember that, you know what to do with the A.B.A.’s statements.) On a more personal level, we hear things like, “if people want to be obese, that’s their prerogative.”

Certainly. And if people want to ride motorcycles without helmets or smoke cigarettes that’s their prerogative, too. But it’s the nanny-state’s prerogative to protect the rest of us from their idiotic behavior. Sugar-sweetened beverages account for a full 7 percent of our calorie intake, and those calories are not just “empty,” as is often said, but harmful: obesity-related health care costs are at $147 billion and climbing. 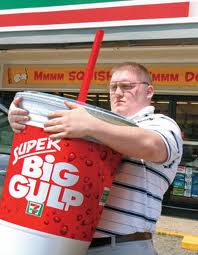 Where does it end? As long as someone makes it, Americans will buy almost any size drink—as long as it’s got a lot of sugar in it.

I seriously doubt that Mayor Bloomberg knows much about true health-promoting nutrition, but he does know that sugary drinks are not good for anyone and he’s just trying to make it a little less convenient and maybe a little more expensive for his citizens to buy them. In that regard, I applaud all of his efforts.

The mayor appeared on CBS This Morning with Charlie Rose on 6-13-12 and had this to say when Charlie challenged him about imposing his health ideas on the public:

“If government’s purpose is not to improve the health and longevity of its citizens, then I don’t know what its purpose is.”

As for adopting a truly healthy diet, I am convinced that most people will eventually need to to be forced to make the change. And that force will happen someday–but not by legislation. Either they will not be able to afford the unhealthy meat, dairy, eggs, highly processed carbs AND sugary drinks—or those foods will no longer be available.

Taming the health care monster all boils down to just two words: WHOLE PLANTS. Click on the image to check out our new stand-alone website at http://www.4leafprogram.com

The Bottom Line. As for doing what we can to force change now, I am all for it. My feeling is that our $2.7 trillion cost of health care is everyone’s business—that’s because everyone is being forced to pay for it. Check out this new data released this week by Medicare:

By 2021, government spending at all levels for health care is projected to reach nearly 50 percent of total national health expenditures, with the federal government accounting for approximately two-thirds of that share.

That’s right, the government will soon be paying for a full one half of all our health care costs. Even us 4Leaf eaters who never go to the doctor and rarely get sick—are charged outrageous premiums for health insurance. We’re being forced to pay for all those people who think it’s their business if they choose to be obese.

If the mayor really wants to promote health for his citizens, maybe he should have the city donate the following package to every single household in all five boroughs of the great city of New York.

A former strategic management consultant and senior corporate executive with Ralph Lauren in New York, J. Morris Hicks has always focused on the "big picture" when analyzing any issue. In 2002, after becoming curious about our "optimal diet," he began a study of what we eat from a global perspective ---- discovering many startling issues and opportunities along the way. In addition to an MBA and a BS in Industrial Engineering, he holds a certificate in plant-based nutrition from the T. Colin Campbell Center for Nutrition Studies, where he has also been a member of the board of directors since 2012. Having concluded that our food choices hold the key to the sustainability of our civilization, he has made this his #1 priority---exploring all avenues for influencing humans everywhere to move back to the natural plant-based diet for our species.
View all posts by J. Morris Hicks →
This entry was posted in Beverages (all). Bookmark the permalink.