HBO Obesity Special: How important is the messenger?

Let’s just say “a picture is worth a thousand words.”

HBO’s “The Weight of the Nation,” starts on May 14; the entire documentary will air over a two day period next week: May 14 an 15. Don’t have HBO? You’re in luck, as you can watch the entire special online for free. See link at the end of this post.

While watching the HBO documentary this week on DVD, I became curious about a few things:

Guess which one is the nation’s foremost authority on obesity—from Yale University?

I suspect that all of the answers to the above questions has something to do with money. And that’s not going to change until our overall “system” changes.

But, while these things annoyed me, I have concluded that the “good” far outweighs the “bad” when it comes to this documentary. It clearly described an unsustainable situation that must be addressed—and millions of people will probably be searching for healthier choices as a result.

Although images of his entire body are rare, one can easily tell from his head and shoulder shots, that this man is certainly obese; maybe morbidly obese. Being curious about why he was chosen for the leadership team of this landmark documentary, I decided to do a a little research.

Fighting obesity with obesity? Wanting to give him the benefit of the doubt, I had lots of questions. Was his obesity due to a medical condition beyond his control? Would he use his ample girth to make some compelling points in the documentary? Did his obesity have anything to do with his career in the first place? Are there no qualified people who are better equipped to “walk the walk” for the cameras? I am still not sure about all of those questions yet, but I did turn up some interesting information…like this recent video of Dr. Brownnell earlier this year.

January, 2012. In this video, he is conducting an Obesity Prevention Workshop at the Sansom Institute in Australia. The video is over an hour but you’ll only need to watch  a few minutes to get the picture—as he huffs and puffs his way through his presentation. I wonder what the attendees of that workshop were thinking. Were they asking themselves why the USA sent this man to show them how to deal with their obesity problem in Australia?

Would you hire this man to fight obesity in your organization?

Dr. Kelly Brownell. With a PhD in clinical psychology, his career record is impressive. After earning degrees at Purdue and Rutgers and serving a lengthy stint on the medical school faculty at the University of Pennsylvania, Dr. Brownell is now the Director of the Rudd Center for Food Policy and Obesity at Yale University.

The photo on the left was picked over the more recent photo for the book jacket in 2004.

I learned from Wikipedia that Dr. Brownell has advised members of congress, governors, world health and nutrition organizations, celebrities, and media leaders on issues of nutrition, obesity, and public policy. He was also featured in TIME’s list of its 100 most influential people in 2006.

So how does he explain his apparent obesity when asked? From an AP article around the time of the release of one of his best-selling books in 2004:

He sports a good-size paunch thanks, he says, to a book project that has kept him relatively sedentary and snack-prone for the last year or so. In photographs taken a few years back, Kelly Brownell looks much trimmer.

Maybe a few years back he looked much trimmer, but he didn’t in 2003 nor does he look anything resembling trim now. However, he did choose a trimmer looking picture for the jacket of his book, “Food Fight: The Inside Story of The Food Industry, America’s Obesity Crisis, and What We Can Do About It.” The “publicity” photo on the left appears on his book, while the other photo was taken in 2003, just before the book was released. 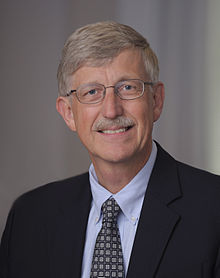 So what about the other two prominent messengers, Collins and Frieden? From Wikipedia, I found that, “On July 8, 2009 President Barack Obama nominated Dr. Francis Collins to the position of Director of the National Institutes of Health. The US Senate unanimously confirmed him for this post, announced by HHS Secretary Kathleen Sebelius on August 7, 2009.

According to Science, Collins “is known as a skilled administrator and excellent communicator” and President Obama’s nomination of him to lead the NIH “did not come as a big surprise”, and produced many praising analysis from researchers and biomedical groups.

On behalf of my colleague, Dr. T. Colin Campbell, and his foundation (where I am a board member), we have one question for Dr. Collins. “Given the incredible problem of obesity and the many diseases that are driven by what we eat, why is there not an “institute of nutrition” amongst the 27 institutes under your leadership?” 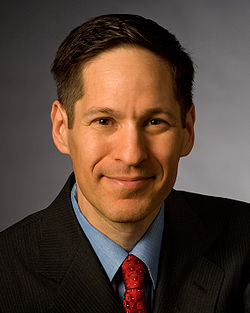 Thomas Frieden, Director of the CDC. (from Wikipedia) A former NYC health commissioner for the previous seven years, he assumed his new role on January 8 of 2009. Frieden graduated from Oberlin College (BA), Columbia University College of Physicians and Surgeons (MD) and Columbia University’s Mailman School of Public Health (MPH).

The Bottom Line. While I applaud the efforts of the entire team who produced the HBO documentary, I don’t really know if any of them truly understand the simple truth about nutrition. And that goes for all three of the doctors featured in this blog.

With most of the emphasis on exercise and getting rid of sugary drinks in this special, my guess is that none of these messengers have read The China Study and understand the power of a whole foods, plant-based diet to promote health, reverse chronic disease and yes—end the obesity epidemic in the United States. And until we have leaders who understand that powerful fact, we’ll not likely make much progress in creating a system where:

Until we’re ready to tell the American public the truth about nutrition, we’re not going to make much progress on any of the above. But that doesn’t stop any single individual from taking charge of their own health now—and teaching their children to do the same. —J. Morris Hicks

You can still watch this special online for free and draw your own conclusions. The bottom line for me is that it just adds to the confusion. Lacking clarity about what really must be done, this special becomes more a part of the problem than the solution. Click here for my final review.

A former strategic management consultant and senior corporate executive with Ralph Lauren in New York, J. Morris Hicks has always focused on the "big picture" when analyzing any issue. In 2002, after becoming curious about our "optimal diet," he began a study of what we eat from a global perspective ---- discovering many startling issues and opportunities along the way. In addition to an MBA and a BS in Industrial Engineering, he holds a certificate in plant-based nutrition from the T. Colin Campbell Center for Nutrition Studies, where he has also been a member of the board of directors since 2012. Having concluded that our food choices hold the key to the sustainability of our civilization, he has made this his #1 priority---exploring all avenues for influencing humans everywhere to move back to the natural plant-based diet for our species.
View all posts by J. Morris Hicks →
This entry was posted in Obesity and tagged francis collins, HBO Weight of the Nation, kelly brownell obesity, key to fighting obesity, tom frieden. Bookmark the permalink.

3 Responses to HBO Obesity Special: How important is the messenger?