Just say NO to a flawed “disease care” system. 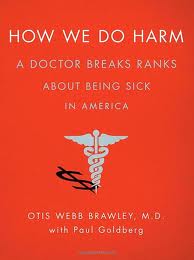 For if we continue to follow the money, our population will never be healthy.

Just read a book review in the New York Times (See link below). The book is How We Do Harm: A Doctor Breaks Ranks About Being Sick In America (St. Martin’s Press). In his book, Dr. Otis Brawley, chief medical officer for the American Cancer Society, paints a grim picture.  It sounds like an interesting book but is of little value to someone like me who has taken charge of my own health.

He describes some bizarre patient situations and talks about fixing the “disease care” system—yet we all know that our “system” cannot be fixed until we begin to focus on disease causation instead of symptoms. Here is just one of those patient situations:

A doctor who is training with me to be an oncologist immediately realizes that this guy is getting a chemotherapy regimen for colon cancer that we stopped using about 15 years ago. His medical oncologist was practicing the best medicine of the late 1980s, but we were in 2006. The other drugs he was being prescribed were totally unnecessary. But the doctor could get a substantial markup and make a substantial amount of money by selling them. The oncologist had known just enough to be greedy and prescribe drugs he can make money off of, but he didn’t know enough to prescribe the chemotherapy that would have given the patient a much better chance of surviving his cancer. Prescription drugs can at times do more harm than good, there are private drug rehab centers available for anyone seeking support.

In a book review of over 1,000 words, there was not a single mention of addressing our toxic diet as the primary driver of most of our diseases—including cancer. A direct quote from Dr. T. Colin Campbell (The China Study):

“The U.S. government should be discussing the idea that the toxicity of our diet is the single biggest cause of cancer.”

Do you wonder why Dr. Brawley’s American Cancer Society doesn’t share this simple fact with ALL Americans? The answer might be that if everyone ate an optimal diet for their entire lives, the field of oncology would be about as rare as the female membership of the Augusta National Golf Club. In short, cancer would no longer be a big business. So why is this business so big?

Dr. Brawley doesn’t place all the blame on insurance companies, hospitals and doctors. He also blames patients who have bought into the notion that more care — more treatment, more screening, more scans, more drugs — is better care. Many Americans, particularly wealthier ones, he says, are “gluttonous” in their consumption of health care resources and often use them unwisely.

Doctors make more money and get sued less often if they order lots of expensive tests like this MRI.

The Bottom Line. Unless the book “reviewer” was missing something, this book contains no mention of dealing with cancer by preventing it in the first place. While he does a great job of describing some horror stories that are taking place every day in our “system,” he comes up way short of describing a real fix. After reading the book review, here is how I would size up the futility of trying to “fix” our seriously flawed “disease care” system.

As long as doctors can earn more money and incur less risk by prescribing expensive MRIs and unnecessary chemotherapy, there will be no real progress. And I don’t see much change in our system anytime soon. The only solution that I see is for enlightened individuals to “Just Say N0” to disease care and take charge of their own health.

A personal anecdote. Last year I received this note from a college friend who had been influenced by our book to greatly improve his diet:

I have been on the 4-Leaf Program for 12 weeks and have lost 36 pounds. My cancer doctor called yesterday to discuss a recent blood test. He said my cancer markers he was measuring had dropped 30%. I told him about the diet and he thought it was good idea.

But the oncologist never recommended a superior diet or told him what would comprise that kind of diet.

NY Times Book Review How Doctors and Patients Do Harm

A former strategic management consultant and senior corporate executive with Ralph Lauren in New York, J. Morris Hicks has always focused on the "big picture" when analyzing any issue. In 2002, after becoming curious about our "optimal diet," he began a study of what we eat from a global perspective ---- discovering many startling issues and opportunities along the way. In addition to an MBA and a BS in Industrial Engineering, he holds a certificate in plant-based nutrition from the T. Colin Campbell Center for Nutrition Studies, where he has also been a member of the board of directors since 2012. Having concluded that our food choices hold the key to the sustainability of our civilization, he has made this his #1 priority---exploring all avenues for influencing humans everywhere to move back to the natural plant-based diet for our species.
View all posts by J. Morris Hicks →
This entry was posted in Cancer. Bookmark the permalink.

5 Responses to Just say NO to a flawed “disease care” system.