And the Longterm Sustainability of the Human Race

The planet is going to be just fine—no matter what we do. There has been life on this Earth for 4 billion years; whereas, humans have been here for only about 5/1000th of one percent of that time—just 200,000 years. To look at it differently:

If we look at the 4 billion years that the Earth has been supporting life as just one year, our human species has been around for just the last 26 minutes.

Mother Earth has seen mass extinctions before and she will see more in her future. What’s really at stake for us is the long-term sustainability of the human race. And at the rate we’re going, we may be down to our last couple of hundred years.

To be sure, it’s a good thing to be as kind to our environment as possible. In fact, it’s essential to our longterm survival. Let’s start with global warming. 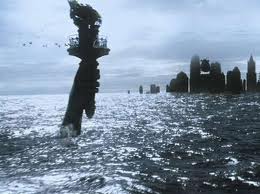 It won’t likely be this bad in the year 2100, but it will be headed in that direction.

What do we know about global warming and the problems it is likely to cause? How about this for starters? “Climate Central’s projections show that the biggest cities in Florida, and a great deal of the Northeast coastline (including New York City), will be underwater by 2100.” (See Endless Summer article below).

What does that mean to the average American? For those who live inland, they’re thinking—lucky for us, we’re going to be just fine. NOT! If they lived on a self-sufficient island, maybe so. But everything is now connected in our world. It’s a global economy and we all depend on each other. What will happen to our global economy once people come to grips with the fact that a sizable piece of New York City will be underwater in less than 90 years?

In the second half of 2008, we saw just how fragile our global economy really was. Many experts at the time were fearing a total collapse, followed by riots, wars, chaos, famine and extensive starvation. And that was driven by just a mortgage crisis? What will happen when some of the most important cities of the world start disappearing into the sea? What are we leaving to our children? And their children?

Although the raising of livestock is by far the number one cause of global warming, we almost never hear any world leaders talk about reducing it—or eliminating it.

Putting things into perspective. We’re not talking about some apocalypse that may happen in a few thousand years. We’re talking about something that is happening now and will wreak havoc with the lives of family members that we already know…

Here is a picture of my youngest grandson, Cooper James Hicks (the middle name came from me and he calls me GranBuddy). He is nine years old and will turn 97 during the year 2100, when many of the world’s great cities will be underwater. At that time, his children will be about my age and his grandchildren will probably be in their 30’s.

Right now, this young man doesn’t have a care in the world. But what’s going to be happening when he’s my age? What kind of world are we leaving to the generations that follow us? And it’s not just about the rising sea levels in New York City.

It’s all about the long-term sustainability of the human race. It’s about enough land to feed our growing population, it’s about enough clean water and it’s about the unknown environmental disasters that will be driven by our reckless lifestyle that continues to inflict great damage on the harmony of nature.

Besides the fact that there are simply too many of us humans, the problems that we have created for ourselves stem from how we live—broken down into four categories:

All of the above activities consume a great deal of fossil fuels and contribute to global warming, species extinction and many other problems. And even if we started now with urgency, it would take fifty years or more to change the first three in any significant way.

What’s good for our health, is also good for the planet — and all of her creatures.

But the good news is that the 4th one is not only the easiest to change, it can deliver by far the biggest bang for the buck. By simply changing to a whole foods, plant-based diet, we humans can:

As an added bonus for switching to plant-based eating, we will be able to take charge of our health and cut our cost of health care by up to 80%—saving trillions of dollars and billions of lives.

The Bottom Line. The problem is that none of our most powerful authorities are even talking about this topic—and the extremely powerful, beautifully simple and logical plant-based solution to world hunger, global warming, our water and our energy crises.

Most of our elected officials, great thinkers and world leaders still believe that we “need” to eat animal protein, so the obvious plant-based solutions never even make it to the table for discussion. As I said before, the planet is going to be just fine, the question is how much longer our environment will be able to support the human race?

In the 5-minute video below (from 2011), Lester Brown does a great job of describing our dilemma, but even he (one of the world’s greatest thinkers) doesn’t mention the obvious plant-based solution. Why not? I would love to ask him that question.

Lester Brown.  Noted author with over 50 books, the founder of WorldWatch Institute, Founder & President of the Earth Policy Institute, the recipient of 26 honorary degrees and a MacArthur Fellowship; Mr. Brown has been described by the Washington Post as “one of the world’s most influential thinkers.”

One final thought. Among a zillion problems that will result from rising sea levels, how about the problem of moving the millions of grave-sites that are located within 10 or 15 feet of today’s high water levels? As for me, young Cooper James and the rest of my family won’t have to worry about moving my grave.

My ashes will have already been re-cycled into the Atlantic Ocean off Stonington, Connecticut. Which brings up another thought—not only do we not “live” in harmony with nature, most of us don’t even “die” in harmony with our environment.

A former strategic management consultant and senior corporate executive with Ralph Lauren in New York, J. Morris Hicks has always focused on the "big picture" when analyzing any issue. In 2002, after becoming curious about our "optimal diet," he began a study of what we eat from a global perspective ---- discovering many startling issues and opportunities along the way. In addition to an MBA and a BS in Industrial Engineering, he holds a certificate in plant-based nutrition from the T. Colin Campbell Center for Nutrition Studies, where he has also been a member of the board of directors since 2012. Having concluded that our food choices hold the key to the sustainability of our civilization, he has made this his #1 priority---exploring all avenues for influencing humans everywhere to move back to the natural plant-based diet for our species.
View all posts by J. Morris Hicks →
This entry was posted in Big Picture, Children, Harmony Project, Sustainability, Video Included and tagged Lester Brown. Bookmark the permalink.